On the final day of the Dezeen 15 digital festival, architect and designer Neri Oxman discussed her manifesto and accompanying film Nature x Humanity in a live interview.

"How might we leverage design to mediate between biology and technology, the lab and the garden, nature and humanity?" the designer asked.

According to Oxman, by "embracing complexity and diversity across systems and scales in design, we open ourselves to advancing beyond mere maintenance towards the betterment of nature." 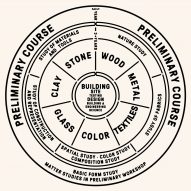 Neri Oxman is an American–Israeli architect and designer known for pioneering the field of Material Ecology. Formerly a tenured professor at MIT, founder and director of The Mediated Matter Group; she now runs her own lab, called Oxman, in Manhattan.

Oxman has written about two of her projects as part of her contribution to Dezeen 15, describing the Synthetic Apiary II project that investigates the way bees build hives and the robotically fabricated Aguahoja III pavilion.

The Dezeen 15 festival has seen 15 contributors write a manifesto that could change the world over the next 15 years in a live video interview. Each contributor has also presented their idea in a live interview with Dezeen's founder and editor-in-chief Marcus Fairs.