Architecture office Kokaistudios has slotted a polycarbonate structure into the shell of a former factory in Shanghai, China, to create the Baoshan Exhibition Center.

The exhibition space occupies one of few factory buildings that have been preserved on a large industrial site in the Baoshan District, which was once used to produce steel.

Shanghai-based Kokaistudios' goal for the 725-square-metre factory was to create a flexible interior while preserving all of the structure's original details.

The project is shortlisted for the cultural building of the year in the Dezeen Awards 2021.

The factory building chosen for the project is positioned at the gateway of the 450,000-square-metre site.

It was commissioned by its owner Baosteel to promote the redevelopment of the remaining factories on the site, as well as other disused industrial buildings in Shanghai.

"Baoshan Exhibition Center preserves the industrial legacy in Shanghai, while setting the stage for its future functions," said Kokaistudios.

"Through embedding new architecture volume, as well as in-built flexibility, Kokaistudios' structure sets a precedent for this landmark project."

According to Kokaistudios, Baosteel's vision for the site is to create an "eco-industrial park".

Alongside the exhibition centre, it is expected to include a new waste-to-energy power plant, a museum, offices, a park and a series of wetland areas.

The polycarbonate structure inserted into the factory is designed as a fully separate element, meaning it sits independently from the building's original envelope.

The structure forms a watertight and flexible interior while preserving the factory's original details, which include bulky pipes and machinery inside and out. 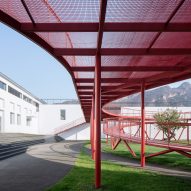 According to the studio, polycarbonate was chosen to create "a powerful contrast between the heaviness of the existing steel building and the lightness of the new building".

Polycarbonate is also lightweight, reusable and could be prefabricated, reducing costs and construction times.

Inside, the main exhibition space is filled with freestanding furniture to maximise its adaptability.

Elsewhere, there is a small coffee lounge, meeting room and smaller spaces for use as other exhibition spaces.

Alongside the polycarbonate, the studio has introduced a material palette that includes concrete and stainless steel, chosen for their "cooler tones".

"Throughout, cooler tones contrast with the structure's former associations of blasting furnaces," the studio explained.

The main exhibition hall is the only space to feature natural materials, including wooden veneer that nods to the trees surrounding the site.

Kokaistudios' renovation of the factory is completed with a landscape design that includes simple stone pavers arranged in a striped formation.

Other shortlisted projects in the cultural building of the year in the Dezeen Awards 2021 include the Yabuli Conference Center by MAD Architects and the Babyn Yar Synagogue by Manuel Herz Architects, which won the public vote for the same category.

Elsewhere in China, Rede Architects and Moguang Studio also recently adaptively reused a factory in Beijing to create a youth centre filled with ramps and slides.

The photography is by Terrence Zhang.