Photographer Hayley Eichenbaum has created a series of images documenting the roadside architecture of America's Route 66 that takes its cues from the often uncanny appearance of film stills.

Eichenbaum's photographs are part of an ongoing series called The Mother Road, which nods to the moniker for Route 66 – a renowned highway that runs from Chicago to Santa Monica.

From neon-lit motels to convenience stores clad with retro signage, Eichenbaum's images document the roadside facades she discovered during more than eight road trips across the country's southwest.

"I hope to capture moments that are reminiscent of classic film sets," the photographer told Dezeen, citing the cinematic work of late American director Stanley Kubrick as a significant influence.

Eichenbaum's colour-saturated images portray architectural scenes that include elements such as cars and chairs, which suggest the presence of people despite their absence from the photographs.

"I imagine that my shots are taken right before the story's climax or directly after. I like that tension – devoid of characters yet charged with emotion and colour," the photographer explained.

The Mother Road project began in 2014 when Eichenbaum chose to drive across the US, a journey that she said changed the way she looked at buildings.

"Within an hour of driving, my focus drastically shifted from detail to basic shape," she explained. "Driving long distances often induces something called 'highway hypnosis.' It is a state of being that calls for the most basic level of human observation in order to survive." 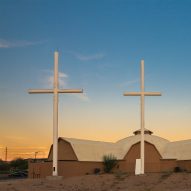 "The hypnosis took over and my camera became more of a medium. The roadside architecture sang like sirens, its colours in my face. I wanted to capture this punchy absurdity," reflected Eichenbaum.

Her design process involves spending on average a week per image researching her desired scene and capturing it once the weather conditions are suitable.

"I like to get lost," she explained. "Post-production involves 'cleaning up' my images – removing anything that distracts from the final composition."

Eichenbaum acknowledged that The Mother Road intends to preserve what she called the "fading nostalgia" of architecture along Route 66 and celebrate highways as iconic.

"This part of American society is threatened by capitalism and mass chains, like everywhere else in the world," she said. "It's disheartening to see our surroundings become more homogenous as a result."

The Mother Road will be released internationally as a book in 2022.

Other architectural photography projects that capture scenes in America include Nikola Olic's poetic close-up images taken of buildings across the country and beyond and Anette LeMay Burke's documentation of disguised cell phone towers.

The photography is by Hayley Eichenbaum.

The Mother Road is currently presented online at Homecoming Gallery, and also at pop-up gallery Kerkstraat61 in Amsterdam from 20 November to 18 December 2021. See Dezeen Events Guide for an up-to-date list of architecture and design events taking place around the world.