Architecture studio OMA has completed the first phase of transforming a US Postal Service building into a multi-purpose destination in downtown Houston.

The public areas at POST Houston opened on 13 November 2021 within a 500,000-square-foot (46,450-square-metre) concrete mail-sorting warehouse and office building, which was used by USPS until 2015.

The huge structure was built in 1962 by Wilson, Morris, Crain & Anderson – the firm behind the Texas city's Astrodome sports arena – on the site of what was once Houston's Grand Central Station.

Led by partner Jason Long, OMA's New York studio masterplanned the adaptive-reuse project and designed a series of spatial and structural interventions within the former warehouse.

To connect the 16-acre site with the downtown business and theatre districts, the team created a series routes to the building that continue inside as voids.

"Like farmers working on concrete soil, we raked a series of horizontal thoroughfares into and through it," said OMA.

These cut-through sections serve as large atriums that bring light into the building's deep floorplates.

Named X, O and Z, the atriums also organise the ground floor into zones for cultural and retail, a food market, and collaborative workspaces.

"By cutting into the building and drawing people in and through it, we are aiming to fold different programs into every corner – weddings next to food halls next to concerts next to new ways of working – and to turn Houston to a view that reveals the city's radical ambition," said Long.

Each atrium contains a "monumental" staircase that leads up to offices across the upper level and a six-acre park on the roof.

The stairways are distinct in shape, structure and materiality, but all three are intended to encourage interaction between visitors. 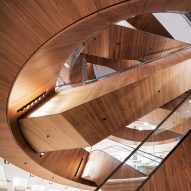 The first, wrapped in weathering steel, incorporates bleacher-style seating into its angled flights that connect a series of mezzanine platforms.

Vertical bars of light surround the white form of the second staircase, which spirals in a double helix around an elevator shaft.

The third comprises concrete steps with green underside supports, arranged as pairs of flights that symmetrically dogleg to create two X shapes when viewed from the front.

"Their paths are doubled, intertwined, and expanded to provide not just trajectories up to the roof but places for accidental encounter – each is an instrument to bring people together," OMA said.

The structural intervention allows for a column-free span across the flat general assembly area, while tiered seating is suspended above.

On the roof, which boasts an impressive view of the downtown skyline, there are two additional restaurants and an urban farm, along with additional performance zones, shaded gardens, and recreation areas.

OMA New York also recently completed work on the new design galleries at the refurbished Denver Art Museum and the extension of a Jewish temple in Los Angeles.

The photography is by Leonid Furmansky, unless stated otherwise.