Architecture studio OMA has revealed images of the first completed part of its renovation of Berlin department store KaDeWe, a retail and event space connected by wood-clad escalators.

OMA designed the spaces as part of its renovation of the Kaufhaus des Westens (KaDeWe), the second-largest department store in Europe after London's Harrods.

As part of the renovation, the studio divided the nine-storey building into four quadrants, which are each arranged around a central atrium.

"Each one is organised around a core void, which acts as main vertical circulation and orientation point."

The now completed first quadrant contains retail and event spaces as well as the beauty department on KaDeWe's ground floor.

It is arranged around a circular central void that is crisscrossed with wood-clad escalators.

As part of OMA's KaDeWe renovation, it has also designed a glass extension for its roof, which the studio says will "extend organically" from the existing building.

The department store's food laboratories will also be unveiled as a part of the new outdoor space.

Each of the four quadrants designed by OMA for the store will have a different street entrance and a different architectural theme, targeting four audiences – classic, experimental, young and generic.

The finished space has a two-storey-high shop window, which sits on the corner of Tauentzienstraße and Passauer Straße and will be used to display both analogue and digital showcases.

OMA designed KaDeWe's renovation to be an alternative to the store's former set-up, which the studio says had been rendered obsolete by "late 20th century modifications".

Instead, OMA aims to reinterpret the traditional department store model. 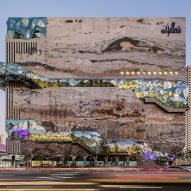 "The renovation of the KaDeWe aims to redefine the dynamic between retail space, its patrons, and the urban environment, in a time when e-commerce is reshaping our relation with in-person shopping," Van Loon explained.

"The project reinterprets the fundamental elements of a typology that has remained virtually unchanged for more than 100 years."

OMA's masterplan and renovation of KaDeWe was first announced in 2016.

Since then, the studio has also completed an entirely new department store, the Galleria in Gwanggyo, South Korea, which features a multi-faceted glass passage that has been cut into it.

Photography is by Marco Cappelletti courtesy of OMA.