Architecture firm OMA has put the finishing touches to an extension of a Jewish temple on Los Angeles' Wilshire Boulevard.

The OMA New York team, led by partner Shohei Shigematsu, designed the pavilion as a counterpart to the 1929 Byzantine-Revival temple, which is home to LA's largest Jewish congregation.

The 55,000-square-foot structure is clad in 1,230 hexagonal panels, some of which have rectangular glass openings that are arranged to create a pattern across its sloped facades.

Made from glass fibre reinforced concrete (GRFC), the six-sided tiles are based on the geometries found inside the original temple building's dome.

They are all ribbed in the same direction so that when rotated, the tiles catch the light differently and give the surfaces more variation and character.

The new extension's irregular trapezoidal shape leans west, away from its older neighbour, and sits south of a historic school on the site.

It houses a series of multi-functional spaces for the community, including meeting, banquet and pre-function areas, as well as back-of-house facilities.

"We assembled a constellation of spaces, distinct in form, scale, and aura," said Shigamatsu, who arranged the interior around a trio of voids.

The lowest void is an arched volume that cuts through from the street-facing side to the school courtyard at the back of the pavilion.

Above is a trapezoid void that cores the building in the opposite direction, facing west to frame the temple's stained glass windows. 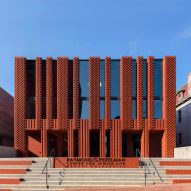 A chapel on this level opens onto an outdoor terrace with green sides, mimicking the green copper dome next door. A glass oculus in the floor overlooks the events space below, while a circular cut-out in the ceiling provides a peek at the third void above.

This final space holds a sunken garden, surrounded by blue glass and connecting to smaller meeting rooms, and provides access to the roof that offers views of Downtown LA and the Hollywood Hills.

"Three interconnected voids make the solid form of the Pavilion strategically yet surprisingly porous, engaging the campus and the city," Shigamatsu said. "The Pavilion will support both old and new activities, values, and traditions to foster a renewed energy for gathering."

OMA founder Rem Koolhaas was also commissioned to design a mezuzah – a piece of parchment called a klaf contained in a decorative case and inscribed with specific Hebrew verses from the Torah – for each door frame within the pavilion.

Each mezuzah is crafted from aluminum foam and cast in colored resin, then topped with an individual letter called a shin that is hand-cut, filed and polished.

"I was both intrigued and challenged to design the mezuzot for the doors within the Pavilion," said Koolhaas. "It is an unexpected religious object having to answer explicit religious edicts, laws and rules which made it totally fascinating for me and a very good lesson to have at some point in my life."

OMA won the competition to design the pavilion in 2015, and revealed its proposal in 2018.

Although the building is now complete, its opening has been delayed due to the restrictions on gathering caused by the Covid-19 pandemic.

"The making of the Audrey Irmas Pavilion sustained forward momentum through the Covid-19 pandemic, a period in which the act of human interaction was questioned and contemplated," said Shigamatsu.

"Its completion comes at a time when we hope to come together again, and this building can be a platform to reinstate the importance of gathering, exchange, and communal spirit."

The photography is by Jason O'Rear.