Architecture practice BIG has revealed its designs for a 12-building AI and cybersecurity campus in Bratislava, Slovakia, that will be visually connected by undulating solar roofs.

Designed as a "tech neighbourhood", the development will contain the headquarters for Slovak internet security company ESET. It is set to be built on the site of a former military hospital in Patronka, in the west of Slovakia's capital city.

The AI and cybersecurity hub will be designed by BIG with Slovak architecture studio Inflow, and engineering studios Buro Happold and Arup. The 55,000-square metre development will have 12 buildings of different sizes and uses organised around a central courtyard and surrounded by landscaped public spaces.

Although individual, detached structures, the campus will be visually unified through its undulating roof. This will rise, taper and dips across its 12 volumes to evoke the nearby Carpathian Mountains.

"Rather than a single hermetic entity, we have dissolved the ESET Campus into an urban village of interconnected buildings, framing public paths and urban squares," said BIG founder Bjarke Ingels. 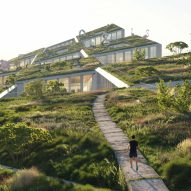 "The diverse cluster of individual pavilions are unified by the undulating solar roofs – forming a single silhouette rising from the forested park-like a man-made addition to the Little Carpathians mountain range."

"Together with the adjacent university, the ESET Campus is set to spark the formation of Bratislava's new innovation district."

A central atrium will be placed at the centre of each of the four ESET headquarters buildings, which will be internally lit by skylights. Plants and shrubbery will be incorporated throughout the interior to further the connection with nature.

The development will be topped with a photovoltaic roof, while the exterior of the volumes will be clad in glass and timber.

"The use of timber throughout the project ensures the lowest possible carbon footprint."

The courtyard at the centre of the campus will have public amenities including retail, sports, cultural and educational spaces organised around it.

On the north-western side of the concentration of buildings, the campus will open up to a park, which will be landscaped to blend in with the adjoining natural terrain and includes native plants and biodiversity among areas for outdoor working and public use.

Earlier this year BIG unveiled designs for another tech campus made from 12 interconnected buildings. Named Fuse Valley, the development will house Farfetch's headquarters and other technology companies.