Architecture practice BIG and developer Castro Group have unveiled designs for the Fuse Valley development in Porto, which will house the headquarters of luxury fashion platform Farfetch as well as tech companies.

Located on the slopes of the Leça River, in the northern area of Porto, Portugal, Fuse Valley will contain Farfetch's headquarters within 12 interconnected buildings.

The whole site, described as an "urban fashion village," will be designed by BIG and have 24 buildings in total, with the additional buildings set to house other tech and startup companies.

The 178,000 square-metre Fuse Valley development will feature buildings organised in a checkerboard formation and oriented around landscaped parks, courtyards, gardens and plazas.

The structures have an angular design that looks to mimic the surrounding hillside landscape, with hill-like peaks and valleys created through sloped green roofs.

The exterior walls of the office buildings are similarly sloped, with gridded, chamfered facades tapering to ground level in order to widen public paths and create canopies over walkways.

BIG incorporated outdoor paths to lead visitors around the community village and up onto the sloped-roofed offices, creating an extension of the surrounding hillside.

Farfetch's headquarters will occupy half of Fuse Valley's site, with offices tailored to suit a number of different functions.

Alongside the headquarters, an "urban alley" by its eastern, river-facing side will house an auditorium, a canteen and wellness facilities. 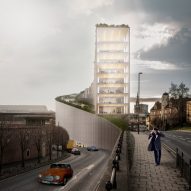 "Rather than a corporate office complex, Farfetch’s future home in Fuse Valley will be a lively urban ensemble bringing every curator, creator, customer and collaborator together in the most innovative new neighbourhood of the city," said BIG founder Bjarke Ingels.

"The urban fabric will allow Fuse Valley to grow and expand organically, like a natural village."

Open-plan spaces will provide employees with flexible work areas, with added terraces to extend interior spaces to the outdoors.

The top levels of the building will form "atelier-like attics" with the sloping roofline creating triple-height spaces that taper out to the terraces.

"What we are going to do in Matosinhos is something unique and that puts this space on the international map of what is best done both in terms of sustainability and in terms of innovation," said Castro Group CEO Paulo Castro.

"With this project, we intend to develop a smart city, or in this case, a smart valley."

Fuse Valley is set to break ground in early 2023 and is hoped to officially open in 2025.

Recently BIG broke ground on CityWave, a building with a sweeping roof that doubles as a photovoltaic power station and aims to visually connect Milan's CityLife development.

Images are courtesy of BIG.