London studio Pearson Lloyd has worked with design and 3D-manufacturing studio Batch.Works to create pen pots, trays and a mobile-phone stand made from discarded food packaging for office brand Bene.

The collection, called bFRIENDS by Bene, was 3D-printed from recycled polylactic acid (PLA) sourced from food packagings by Batch.Works.

It marks the first time that Pearson Lloyd has designed a 3D-printed product, though the studio has long used the technique to envision other projects.

"Up to now, we have always used 3D printing as a development tool for our projects," Pearson Lloyd co-founder Tom Lloyd told Dezeen.

"The technology has changed in nearly 20 years from an exotic and expensive tool that we used to replace hand-carved form models, to an engineering tool to test physical parts, and now to an affordable way of prototyping rapidly with the studio," he added.

"We run two desktop printers that cover most of our needs, and go out to more specialist companies for larger or more precise parts."

The studio's designs for the bFRIENDS collection, which features organic, undulating shapes reminiscent of corals, came about because it wanted to eliminate the hand-finishing aspect and reduce the 3D printing time.

"To achieve this, we chose to develop a formal language where the print head never needs to lift off and relocate during the print," Lloyd said.

"This led us to design each product as a single line that traces all functional elements within its perimeter," he continued.

"The challenge of creating individual pen holders led in turn to the squiggle line that weaves in and out around each pen. Once we had developed this idea, the language for the whole range quickly followed." 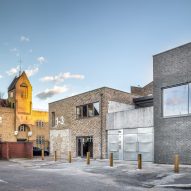 The collection comprises five items – two pen pots, a stand and two trays – and is made from 100 per cent recycled PLA by Batch.Works, which sources the bioplastic material from Europe.

"Our PLA is made from consistent sources of food packaging waste collected in the Benelux region and turned into filament by our material partners Reflow who are based in Amsterdam," Batch.Works founder and CEO Julien Vaissieres told Dezeen.

The studio says the production of the desk accessories, which are made from materials diverted from landfills, is close to net-zero and represents a step towards more circular production.

"We are really proud of the fact that the products made at our new Amsterdam site are as close to net-zero as you can imagine," Vaissieres said.

"Our factory is powered by electricity derived from wind power, our machines are literally steps away from where our raw material is produced, and our staff get to work by bicycle."

PLA is a bioplastic that is derived from cornstarch rather than petroleum, making it a more eco-friendly alternative to regular plastics.

"In terms of material we are fully aware that even when using a biomaterial like PLA, there is a huge amount of energy and water that goes into the production process," Vaissieres said.

"That is why we work so closely with our material supplier to only use material that is already in its second cycle. Intercepting waste that was bound for landfill and transforming it into valuable products."

Once the products have been used, they can be recycled again as PLA. Batch.Works is also working with Bene to create a take-back scheme, allowing users to either send the products back to Bene or drop them off at a Bene showroom.

"Everything in the range has been designed with end of life in mind from the offset," Vaissieres said.

"Each product is mono-material and mono-colour, enabling us to utilise the material to produce new products further down the line."

The recycled translucent PLA is coloured, but the colour accounts for just two per cent of the makeup of the material, according to Vaissieres.

"When we collect products back as part of the circular scheme they will be separated into their colours before being reprocessed into new material," he added.

Pearson Lloyd has previously designed the multifunctional PORTS Storage shelf and various other products for Bene, while Batch Works also used recycled plastic for its collection of lampshades for lighting brand Plumen.