Dezeen has teamed up with the Canadian Centre for Architecture to premiere three short films about Japanese architecture. In the first video, architect Erika Nakagawa shares her vision for a skinny residential tower in Tokyo.

The first film, named A Neighbourhood in A House, guides viewers through a scaled model of the conceptual five-storey building designed by Nakagawa.

Proposed for a site hemmed in by tall neighbouring buildings, the structure seeks to demonstrate how small and dense sites in Tokyo can be utilised.

The three short films being published this week are part of a series called Models Talk, which was produced by the Canadian Centre of Architecture (CCA), a research institution and museum in Montreal.

They are available to watch in Japanese with English subtitles.

One of the key elements of the tower's design that Nakagawa highlighted in the film is its main facade, which is composed of a series of staircases.

While providing access and escape routes, the architect imagines these stairs to be occupied by residents and used as "a sequence of gardens" or a roji – a neighbourhood alley in Japan.

"We wanted to let the residents' enjoyment of life manifest itself on the facade," Nakagawa said.

"I wanted to make the stairs work as a kind of garden for the neighbourhood."

Nakagawa graduated from Yokohama National University’s department of construction in 2005, before achieving her masters in Fine Arts and Architectural Design from Tokyo University of the Arts in 2007.

She opened her eponymous studio, Erika Nakagawa Office, in 2014. While practising as an architect, she is a lecturer at Yokohama National University, Hosei University, Shibaura Institute of Technology and Nihon University. 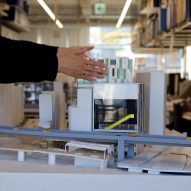 Another key element of the tower's design that is highlighted in the video is its experimental structure, which Nakagawa presents in a series of life-size architectural models.

As it would not be possible to erect scaffolding on the site to construct the building, parts of the tower would be prefabricated and then assembled on-site from the inside.

Nakagawa said that several structural elements are also designed to "participate in the activities of daily life". For example, she imagines exposing H-beams that would usually be hidden so that they can be used as metal shelving in the residences.

The three-part Models Talk series was produced by the CCA in collaboration with architectural curator Kayoko Ota and director Studio Gross, an architectural design firm.

It was created for the CCA c/o Tokyo programme, which is run by the institution with Ota to "develop research and projects, and to facilitate public engagement in Tokyo".

On 8 December, the CCA will be hosting a live conversation at 8:00pm Montreal time to discuss the film series and the urban issues it addresses. CCA's director Giovanna Borasi will be joined by Ota and Studio Gross, as well as all three architects featured in each video.

Attendance is free and registration is open here. To find out more about CCA c/o Tokyo, visit cca.qc.ca/tokyo.

This article was written by Dezeen for CCA as part of a partnership. Find out more about Dezeen partnership content here.