The Twentieth Century Society has launched a petition calling on Marks & Spencer to abandon the controversial demolition of its store on London's Oxford Street or risk "betraying its own carbon targets".

Launched on 2 December and already supported by more than 1,400 signatures, the petition asks the high-street retailer to retrofit its art deco flagship rather than tearing it down to make space for a new building designed by UK studio Pilbrow & Partners.

The redevelopment would waste the embodied carbon of the existing building, generate 39,500 tonnes of CO2 emissions and counteract M&S's recent commitment to becoming net-zero by 2045, according to The C20 Society director Catherine Croft.

"As recently as September 2021, M&S made admirable commitments to carbon reduction across its business and to achieve net-zero within the coming years," she argued in an open letter to the retailer.

"No matter how it's spun, this proposal is simply incompatible with those commitments."

The C20 Society previously filed a listing application for the 1930s Orchard House and its two extensions, which have been home to M&S for the last 90 years, in a bid to preserve its cultural heritage and embodied carbon.

But Westminster City Council turned down the application as it deemed the shop neither "innovative nor of sufficient architectural quality", particularly in light of the various expansions and amendments made to it over the years.

Pilbrow & Partners' redevelopment plans, which were approved by the borough's planning committee last month, will see the six-storey complex with its varying floor levels and ceiling heights replaced by a single 10-storey building.

The new scheme will have almost double the floor space as the original structure, with M&S occupying the lower two levels and part of the first floor while the remainder will be turned into rentable office spaces fringed in garden terraces.

M&S property director Sacha Berendji argued that the new building "positively contributes to our net-zero targets over the long term", as it is lower carbon in operation through its improved energy efficiency and on-site renewable energy.

To compensate for the project's 39,500-tonne carbon footprint, M&S will pay for £1.2 million worth of offsets via the Westminster City Council, which will go towards encouraging carbon savings in the local community.

However, this does not make the final project net-zero, as that would require purchasing offsets that actively remove carbon from the atmosphere rather than simply mitigating emissions elsewhere.

According to the architect's own calculations, 2.4 million trees would need to be planted and maintained to suck the emissions generated by the redevelopment out of the atmosphere.

To honour its net-zero goal, Croft argued M&S should renovate and retrofit the existing building to be more energy efficient.

"The company board risks betraying its own carbon targets in the midst of a global climate crisis," she said. "Save and re-use this building and show your customers and investors that M&S is serious about sustainability and its own net-zero commitments."

"The amount of embodied carbon in the building is enormous compared to the sorts of savings they might be making through encouraging the recycling of clothing," Croft added.

Westminster city councillor Geoff Barraclough, who voted against the scheme, explained during a planning meeting that the project's emissions would effectively negate the carbon savings, which the council is set to achieve over the next 23 years with its £17 million retrofitting scheme. 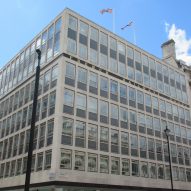 The sentiment was echoed widely on social media, with urbanist David Milner decrying the redevelopment as a "very very poor decision in the context of a climate emergency".

Earlier this year, Westminster City Council signed off another controversial redevelopment near Picadilly, which will see the 1960s French Railways House torn down in favour of an eight-storey complex designed by Make.

"It's a borough, which has just about the highest pressure for redevelopment in the whole country," Croft told Dezeen.

"It would be good if the borough were tougher on environmental issues and prepared to take the lead more because it's absolutely up at the forefront of the debate."

The top image is courtesy of Google Street View.