The spa is found inside the S10 "cult gym" belonging to trainer Stephen Cheuk, whose clients include musicians Diplo and Joe Jonas. The facility's name comes from the level of body fat – sub 10 percent – that Cheuk advises for his male clients.

The fitness club is spread across two levels in an old manufacturing building in the West Village.

The ground level has a 600-square-foot (56-square-metre) coffee and smoothie shop, while the basement level holds a gym and recovery spa totalling 7,200 square feet (669 square metres).

While designing the project, local firm Büro Koray Duman sought to maintain industrial qualities while producing a serene atmosphere within the spa.

"The overarching design goal was to create a calming, soothing and light-filled space to contrast the rawness of the gym," the architects said.

A staircase and elevator lead down to the basement level, where visitors encounter a lobby with a white marble desk and a slatted wall made of Baltic birch plywood. Behind the slats is the facility's name rendered in laser-cut, opaque plexiglass.

Just off the foyer is a rectangular fitness room, which features a black-and-white colour palette and square columns wrapped with mirrors.

The foyer also provides access to the spa, which is L-shaped in plan. Members travel down a corridor and pass by lockers, changing areas, bathrooms and massage rooms.

Upon turning a corner, they discover an airy common space lined with six private spa rooms. The space is adorned with a pink 1969 Verpan Cloverleaf Sofa by Danish designer Verner Panton.

Underfoot is white flooring, and overhead are half arches intended to offer "a sense of progression and arrival", the architects said.

Similar to the lobby, the team used birch plywood for doors and wall panels. Spa room doors are marked with a number made of black film and inserted into wooden slots. 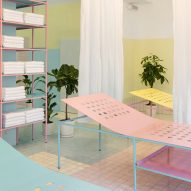 Above the doors are arched openings infilled with polycarbonate, enabling light to pass through.

Each spa room has its own steam shower, infrared sauna and soaking tub. Design elements include warm-toned cedar steps and clear glass with a translucent film.

Throughout the subterranean spa, the team put a special focus on lighting to make up for the lack of windows.

"Lighting was the most important element of the project," the architects said. "We offset bright LED strips from polycarbonate-panelled walls for the space to appear as if it were filled with natural light."

Büro Koray Duman also designed the fitness club's coffee and smoothie bar, which was completed after the project's photo shoot.

Based in New York and Istanbul, the studio has a diverse portfolio of projects that includes a Brooklyn apartment with staggered bookshelves and a Greenwich Village pizzeria with an open kitchen and volcanic stone shelving.

The photography is by Büro Koray Duman.