New York firm Buro Koray Duman has revealed plans for a major update to the Noguchi Museum in Long Island City, which will see the studio and home of American-Japanese sculptor Isamu Noguchi opened up to the public for the first time.

Buro Koray Duman's project intends to offer greater public access and expand the exhibitions programmes at the museum and sculpture garden – which Noguchi completed in 1985 to display works including large-scale sculptures, architectural models and lighting design.

The proposal involves the addition of a 6,000-square-foot (557-square-metre) archival building. Noguchi's pied-à-terre and studio, which is located across the street from museum in New York's Queens borough, will also be renovated and opened for tours for the first time.

"As the guardians of the life's work of one of the greatest sculptors and designers of the 20th century, whose legacy continues to inspire artists, scholars, and the public, the museum must work not only to safeguard the art and archives, but also to make them accessible," said Noguchi Museum board chair Malcolm Nolen in a project statement.

Buro Koray Duman was among seven local firms contacted by the museum to submit proposals for the renovation and expansion. The studio's winning scheme aims to reference the aesthetic of the existing structures.

"The Noguchi Museum and its garden are much beloved spaces," studio founder Koray Duman told Dezeen. "With the design of the new art and archive building, and its relationship to Isami Noguchi's original 10th street studio, we wanted to be respectful of the existing complex." 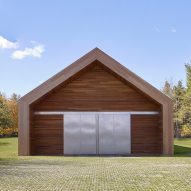 The two-storey Art and Archive Building will be built next to brickwork studio and home that Noguchi described as a "house inside a factory".

Drawing on this, the new structure will feature a brick and concrete construction. Other details include anodised aluminium panels, which are intended to reflect the industrial setting, and expansive glazing.

Buro Koray Duman will complete the Art and Archive Building as the first phase of the project to provide the museum with a dedicated archive and research centre. This is intended to enable the existing 27,000-square-feet (2,508-square-metre) gallery space to host a wider showcase of Noguchi's works, which range from sculptures and playgrounds to household furnishings, objects and photography.

The second phase will involve the restoration of the studio and home. The project will aim to preserve and restore living spaces so that they can be opened up for public tours. The use of the studio is yet to be confirmed.

Born in Los Angeles in 1904, Isamu Noguchi set up his studio in the New York borough of Queens in 1961 and built the accompanying museum and well-known sculpture garden later. He died aged 84 in New York City.

Noguchi – who was recently the focus of an exhibit at Hong Kong's M+ museum's pavilion – specialised in large-scale sculptures during his career, which spanned six decades.

Projects include Munich's Zwillingsplastik, New York's Red Cube, Seattle's Black Sun and Honolulu's Sky Gate in. He also created a series of well-known household objects, such as the the Akari lanterns and a lounge chair for Herman Miller.

"Isamu Noguchi was a fearless, category-defying, cross-disciplinary polymath, and our new Noguchi campus…will allow us to better reflect on the complex nature of Noguchi’s work and life," said museum director Brett Littman.

Founded in 2012, Buro Koray Duman is based New York's Lower East Side.

Other projects by the studio include The Village Den restaurant in Manhattan's West Village and a barn-like artist's workshop in Upstate New York.

Renderings are by Buro Koray Duman.