American architects Angela Brooks and Lawrence Scarpa of Brooks + Scarpa have been awarded the 2022 AIA Gold Medal for their "pioneering brand of architecture that profoundly enriches the human experience."

As the AIA's highest honour, the Gold Medal has been awarded to an esteemed architect in recognition of their work almost every year since the medal was established in 1907.

Los Angeles-based professional and life partners Angela Brooks and Lawrence Scarpa, who lead California and Florida-based firm Brooks + Scarpa, are the second duo ever to win the award and Brooks is only the third woman to receive the medal.

The duo won the Gold Medal for their "pioneering brand of architecture that profoundly enriches the human experience and reveals the extraordinary in what is widely considered ordinary," according to the AIA.

In a letter nominating Brooks and Scarpa for the prestigious award, architects Steve Dumez and Douglas A Benson wrote: "Aside from being outstanding, award-winning design architects, Angie and Larry are also exceptional activists, community leaders, and civic collaborators."

"They are motivated by a social responsibility and environmental stewardship that seeks to find ways to improve the livability of cities and ennoble the daily lives of its citizens," continued Dumez and Benson. 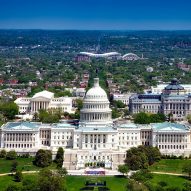 Known for their commitment to what the AIA called "a socially engaged approach to design," Brooks and Scarpa have completed a number of projects with the environment and local communities at their core.

These include The Six housing project, a low-cost housing development in Los Angeles for displaced veterans. The five-storey structure is arranged around a central courtyard and was designed to strike a balance between privacy and a connection with the local neighbourhood.

Other notable projects by the duo include a store created for skincare brand Aesop with walls made from recycled cardboard tubing, a high school wrapped in joyful yellow anodised-aluminium panels that was reconstructed after a fire, and a set of modular units designed as toolkits to construct homeless shelters called Nest.

"No matter the budget, size, or background, the pair espouse the philosophy that design is not mutually exclusive and holds the potential to enrich everyone," said the AIA.

Originally called Pugh + Scarpa, architecture office Brooks + Scarpa was founded by Lawrence Scarpa and Gwynne Pugh in 1991, after which Angela Brooks joined the firm in 1999. Its name was subsequently changed to reflect this new leadership.

Among other American architects to be crowned winners of the Gold Medal are Edward Mazria, who received the medal for 2021, and Paul Revere Williams, who was the first Black architect to receive the award in 2017.

The image of Angela Brooks and Lawrence Scarpa is courtesy of Brooks + Scarpa.