California firms Brooks + Scarpa and Plant Prefab have unveiled a low-cost housing concept for fallow urban sites, which comprise prefabricated, modular units that can be arranged in various configurations.

Envisioned for vacant or underutilised lots, the Nest LivingHomes system was created in response to the dramatic rise in housing costs and homelessness in Los Angeles and other US cities.

The project was conceived by LA architecture studio Brooks + Scarpa in collaboration with Plant Prefab, a design and construction firm in the nearby city of Rialto.

Composed of stackable, prefabricated units, the design system is meant to offer a "scalable, cost-effective, high-quality solution to multi-family housing". In particular, the system offers a way to provide shelter for people living on the streets.

"A main goal for the concept was to give homeless people a sense of dignity and shared social spaces," the team said.

Envisioned as a kit of parts, the system comprises rectangular modules for both public and private functions.

The modules can be assembled in different configurations, depending upon local needs and conditions. A single Nest building can rise up to five storeys.

Within the modules, the layouts can be customised based on a client's specific needs.

The system is particularly well suited for homeless shelters and single-room occupancy (SRO) buildings, in which tenants rent a simple bedroom. But the Nest design also works for apartment buildings with more traditional-style layouts.

"Like the nesting habits of birds, the toolkit is based on the different ways people live with the objective of giving everyone an affordable place to live," said Angie Brooks, managing principal at Brooks + Scarpa.

To help convey their concept, the team has created three different models, each named after a bird species. All of the schemes are envisioned for a 50-by-150 foot parcel (15 by 46-metres) – a typical lot size in LA County.

One model, called the Bluejay, is designed to serve as a temporary shelter that can house up to 224 people. Rooms are approximately 11 by 28 feet (3.4 by 8.5 metres) and can hold multiple beds. 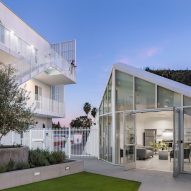 There are modules for a variety of shared spaces, including kitchens, laundry rooms, shower facilities and restrooms. These modules are "designed to operate with our without direct utility connections".

"We have already resourced commercially available equipment that provides potable water supply, gray and black water storage, and energy generation, which are housed in self-sufficient, prefabricated modules," the team said.

The structural system would consist of wooden, load-bearing frames. The standard module has either metal or cement-board siding, although exterior and interior finishes can be customised.

Colourful facade panels are among the accents that a client can choose from. A rooftop garden can also be incorporated, particularly if open space is limited at ground level.

The modules would be constructed in Plant Prefab's factory in Rialto using patented techniques, and would then be transported to the building site. This process "cuts the construction timeline in half and significantly reduces project costs", according to the team.

"We know that people are frustrated by the slow pace of solutions for affordable housing," said company founder and CEO Steve Glenn. "Prefab construction can help increase the pace."

Aiming to attract developers and housing agencies, the Nest system is meant to help homeless and low-income tenants get integrated into all types of neighbourhoods.

"The Nest LivingHomes toolkit is grounded in the belief that housing for the homeless should be scattered throughout regions, rather than having housing concentrated in one community," the team said.

In 2018, the team won a $1 million grant (£777,300) from LA County as part of its Housing Innovation Challenge. The Next toolkit is expected to be utilised for an upcoming housing project in Santa Monica, California.

Other social housing in the US includes a residential complex in Los Angeles by LOHA, which features white facades, exterior circulation and a sloped green roof. The project, called MLK1101, was named housing project of the year in the 2019 Dezeen Awards.