British architect and artist Chris Wilkinson, co-founder of the RIBA Stirling Prize-winning studio WilkinsonEyre, has passed away at the age of 76.

The news of his death on 14 December was announced this morning in a short statement by WilkinsonEyre.

"It is with deep sadness that WilkinsonEyre announce the death of Chris Wilkinson on the 14 December," it read.

"Our thoughts are with his family who have requested privacy at this time."

Wilkinson founded Chris Wilkinson Architects in 1983 and headed up the practice until 1987 when his former colleague Jim Eyre became a partner.

The pair went on to establish WilkinsonEyre in 1999, before winning back-to-back RIBA Stirling Prizes in 2001 for the Magna Science Centre and in 2002 for the Gateshead Millennium Bridge.

In recognition of his contribution to architecture, Wilkinson was awarded an OBE in the Millennium Honours List.

He was also the recipient of an Honorary Fellowship of the American Institute of Architecture in 2007 and held honorary doctorates from Westminster University and Oxford Brookes University.

Alongside the Magna Science Centre and Gateshead Millennium Bridge, key projects by WilkinsonEyre include the Mary Rose Museum, the Stratford Market Depot in England and the National Waterfront Museum Swansea in Wales.

Elsewhere, it completed the Guangzhou International Finance Center in China, One Barangaroo in Australia and Gardens by the Bay in Singapore, which Wilkinson discussed in a video with Dezeen during the World Architecture Festival 2012. 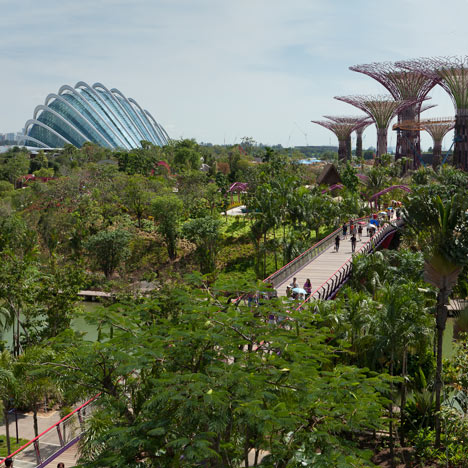 Movie: Chris Wilkinson on Gardens by the Bay

The studio's most recent projects include the conversion of King's Cross gasholders into luxury flats and a mirrored laboratory and sports hangar at Dyson's countryside campus completed as part of a long-term collaboration with the technology company.

Alongside practising as an architect, Wilkinson was an artist and painter. He has exhibited his work at the Royal Academy of Arts where he was elected in 2006 and served as treasurer.

In 2020, he was among the illustrious list of architects to judge the Dezeen Awards.

In a statement released by his family, Wilkinson was described as having "a great sense of optimism".

"Alongside his many achievements as an architect and artist, Chris was a brilliant husband and father," the statement read.

"We will remember his generosity of spirit – he was always available to help others and committed and loving to his family and friends," it continued. "He had a great sense of optimism, living in the moment, and making use of every second. He will be dearly missed."

The photo of Wilkinson is by Rob Greig.