London studio 6a Architects has revealed its plans to renovate and extend a vacant office in Camden that forms part of the Grand Union Complex designed by Grimshaw in the late 1980s.

Expected to complete in 2023, the project will involve refurbishing and extending the office, named Grand Union House, to create 6,500 square metres of modern workspace.

Alongside the offices, 6a Architects will introduce three flexible commercial units and six affordable apartments, while improving the surrounding public space.

The project, approved by Camden Council, is being developed by 6a Architects in collaboration with the London developer Sellar, which acquired Grand Union House in 2006.

The office forms part of the Grand Union Complex, a campus designed for Sainsbury's between 1986 and 1988 by Nicholas Grimshaw & Partners, the British studio now known as Grimshaw. The complex also includes the high-tech Sainsbury's supermarket and terraced Grand Union Canal Walk Housing, both of which are Grade II*-listed.

Grand Union House was intended for light industrial use but it was only ever used as office space due to limited site access.

According to 6a Architects, the redevelopment of the office will reference the high-tech architecture of the adjacent listed buildings, which feature industrial materials and expressed structural elements.

However, the priority of the design is occupant wellbeing, which will be enhanced through the provision of natural light and ventilation, as well as extensive planting and winter gardens.

According to the studio, this is a response to a change in workstyles that has been accelerated by the coronavirus pandemic.

"Our design takes a holistic approach to making workspace for the post-COVID city, addressing wellbeing, ecology and biodiversity by ensuring access to landscape, daylight and fresh air," said Tom Emerson of 6a architects.

Another key element of the proposal is the preservation of the Grand Union House's existing structure, which is made from concrete.

According to Sellar, this is to minimise the project's embodied carbon and offer a "benchmark for sustainable, low-carbon development in London".

"Another key focus for us has been the substantial carbon saving we can make in the construction of Grand Union House by retrofitting the existing building rather than knocking it down and starting from scratch," explained Sellar's chief executive James Sellar.

Embodied carbon refers to the emissions that result from the manufacturing, construction, maintenance and demolition of buildings, which are currently unregulated in the UK. By reusing existing structures, these emissions can be reduced.

Public realm to be enhanced

The Grand Union House overhaul will be complete with updates to its surrounding site, which Sellar said currently has an unwelcoming atmosphere and is prone to anti-social behaviour.

This will improve connectivity to the surrounding area and conditions for pedestrians and cyclists. Planted areas will also be introduced. 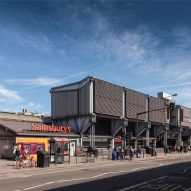 "The project will also bring about a transformation of the surrounding public realm through extensive planting that will enhance the local environment for pedestrians and cyclists," concluded Emerson of 6a Architects.

"By integrating workspace interiors, architecture and urban landscaping, the proposals will create a new social and ecological place."

Elsewhere in London, insurance company Lloyd's of London is planning a renovation of its office – the high-tech Lloyd's building in London designed by Richard Rogers.

The overhaul will prioritise the iconic Underwriting Room at the heart of Lloyd's building to tailor it to the firm's flexible working styles following the coronavirus pandemic.

The visual of Grand Union House is by 6a Architects.