Creatives including Peter Barber, Charles Holland and Julia Barfield are among those to have paid their respects to Pritzer Prize-winning architect Richard Rogers, who passed away this weekend at the age of 88.

British-Italian architect Rogers, one of the world's leading architects, is best known for his iconic high-tech architecture including the Centre Pompidou and Lloyd's building.

His death in London on Saturday evening was confirmed to the New York Times by his son Roo Rogers and on the website of his studio, Rogers Stirk Harbour + Partners (RSHP).

"Rogers was the most fantastic bloke"

Tributes to Rogers flooded social media over the weekend, led by fellow Pritzker Architecture Prize-winner Norman Foster who said the architect was his "oldest and closest friend".

"Richard Rogers was a great pioneering architect of the modern age, socially committed and an influential protagonist for the best of city life – such a legacy," Foster said.

Among the others mourning his loss were British architects Barber and Barfield, who are both former employees of RSHP, then Richard Rogers Partnership (RRP).

"Richard Rogers was the most fantastic bloke….he really was….so charming and charismatic. He was very very kind to me," Barber wrote on Twitter.

Barfield, the co-founder of Marks Barfield Architects, said finding out the news was "such a sad day".

"Richard's generosity of spirit and breadth of vision are my enduring memory - it made working in RRP in heady days of Inmos & Lloyds so exciting & fun," she added.

"I was so proud to have met him"

"His legacy lives on in all of us lucky enough to have worked with and learnt from him," she shared on Twitter.

Graham Stirk, senior design partner at RSHP, also shared his tribute to Rogers, whom he first worked with in 1983. "Within the office I became aware of the sheer drive and range of his architectural thinking and that the dazzling architecture of his buildings and ideas was a synthesis of much wider social and political concerns," he said.

"The technology was there to serve and reinforce how a building could be communicated to all with verve and joy," he added.

"What makes his gift uniquely special was his increasing commitment to wider concepts of urbanism and the political mechanisms that could create better cities and environments."

Writer and PR Rob Fiehn, who also formerly worked at Rogers Stirk Harbour + Partners as media coordinator, said it was "difficult to explain what it was like to work for Richard Rogers".

"I'm pretty sure he's the only starchitect who regularly took part in the inter-practice softball league," he wrote on LinkedIn.

"He put people at the heart of studio life and it resulted in some groundbreaking architecture," he said. "I hope we can all learn from that."

Photographer Jim Stephenson also recalled Roger's generosity, while taking to Twitter to share stills from a film he made with him several years ago.

"Richard Rogers was so open from the moment he walked over until the moment we had everything we needed (and more)," Stephenson said.

"I was so proud to have met him and spend that short time with him. Complete superstar."

"He was one of the world's most influential architects"

Another key figure to pay their respects was the mayor of London, Sadiq Khan, who said he was "terribly saddened to learn of the death of Richard Rogers".

"He was one of the world's most influential architects and the brilliant mind behind some of London's most iconic buildings."

"We are sorry to hear of the loss of Richard Rogers, a brilliant architect and friend of the museum," the museum shared on Twitter.

"He designed some of the great buildings of the twentieth century, and helped change London, both as an architect and an urban thinker. He leaves behind an incredible legacy."

Writer and curator Vicky Richardson said that while Rogers' death was "a huge loss" for the industry, it was "also a chance to celebrate a heroic life".

"Richard Rogers was a true humanist who transformed architecture, cities and public life," she added.

"He shaped a generation"

Grimshaw principal Angela Dapper and Charles Holland were two other architects who took to Twitter to pay tribute.

"Just today I was giving the kids a city tour and was telling them how inspirational his buildings were," Dapper said. "He shaped a generation of architecture and architects - and will always be an inspiration."

"What a remarkable life," wrote Holland, the principal of Charles Holland Architects. "The Pompidou Centre and the Lloyds building are two of the most brilliant and audacious buildings ever."

Insurance company Lloyd's of London, which occupies Rogers' iconic high-tech Lloyd's building in London, said that it was "extremely saddened by the passing of Richard Rogers".

"Tomorrow, as a mark of our deep respect, we will remember Richard's life and ring the Lutine Bell, an emblem of Lloyd's he was known to love," the company wrote on Twitter, referring to a bell salvaged from HMS Lutine that is now used for ceremonial purposes at their headquarters.

The news of Rogers' death also saw his scornful school report from the Architectural Association in 1958 recircle on social media, in which it was declared that the architect's entry into the fourth year was "not successful".

Architect and researcher Marianna Janowicz said: "I remember seeing [the report card] at the RA show and feeling reassured". 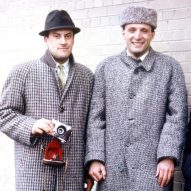 Designer Adam Nathaniel Furman added that Rogers, who was dyslexic, "inspired those of us who navigate the world with dyslexia to see that it in itself wasn't a barrier in design".

"A dyslexic kid who came late to literacy, was never much good at drawing and always struggled to express himself verbally," Pearman wrote.

"What a career in architecture and politics, what a life, what great parties."

The portrait of Rogers is by Andrew Zuckerman, courtesy of RSHP.