Three angular peaks with jutting stone-clad balconies and windows make up Valley, a mixed-use high-rise by architecture studio MVRDV that is nearing completion in the Netherlands.

In new photos revealed by Rotterdam-based MVRDV, the 75,000-square-metre building is captured in Amsterdam's financial district without its scaffolding.

Valley is due to open in 2022, one year later than expected, with 200 apartments and spaces for offices, shops, restaurants and bars.

It was first revealed by MVRDV in Amsterdam in 2015 after the studio won a competition to design it for developer EDGE Technologies.

Valley is composed of three conjoined buildings of different heights, linked by a terraced podium that emulates the low area of land between mountains, giving the project its name.

The tallest peak reaches 100 metres in height and contains a bar across its two upper storeys.

The faces of each peak vary across each side, shifting from glass walls to rockier surfaces composed of stone-clad terraces, bay windows, and balconies.

On its jagged edges, the building also incorporates a "green layer", where 13,000 plants, trees and shrubs have been planted by landscape designer Piet Oudolf. This aspect will be maintained by automatic irrigation systems as well as a team of gardeners.

The plants, which are not currently visible, "will be allowed an initial period to grow and become acclimatised, before the building officially opens in the spring of 2022," according to MVRDV.

"The greenery will then reach its final appearance gradually over the coming years," the studio added.

After revealing Valley's design in 2015, MVRDV's co-founder Winy Maas said the building's design is intended to evoke a "village green".

"The houses have bay windows with beautiful views and large balconies with lots of vegetation, turning the whole building into a kind of village green," he said.

Oudolf's landscape design has been developed to ensure year-round greenery and is hoped to boost the wellbeing of the building's occupants.

The uneven exterior of the building is echoed internally at its heart, where a large atrium is intended to appear as though it has been carved out from a rock. 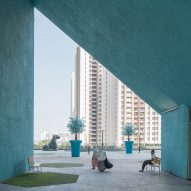 Named The Grotto, it is clad in stone and lit by two giant skylights, and serves as a foyer and shared living space for residents.

According to the studio, no two apartments in Valley are the same, meaning there is a wide variety of housing types. However, each one is orientated to maximise daylight.

All of the apartments also have access to planted terraces. This includes those on the fourth and fifth floors of the building, dubbed the "valley floor", which will double as a public park.

According to MVRDV, the project is hoped to make the city's financial district "a more liveable and complete urban quarter".

MVRDV is a Rotterdam-based architecture studio that was founded in 1991 by Maas alongside Jacob van Rijs and Nathalie de Vries. The firm has also recently completed the Ilot Queyries housing development in Bordeaux and opened Depot Boijmans Van Beuningen – the "world's first publicly accessible art depot".

The photography is by Marcel Steinbach, courtesy of EDGE and MVRDV.