Working with the London Borough of Camden, Peter Barber Architects aimed to update the whole estate and increase its density without demolishing any of the existing homes.

"Environmentally, socially and economically we cannot continue to demolish homes unnecessarily and instead need to focus on densifying our existing neighbourhoods, improving existing buildings and protecting social infrastructure and diverse communities," she told Dezeen.

A terrace of brick homes was built at one of the entrances to the estate, while further low-rise homes were built at the corners of existing blocks and on underused bits of ground between existing buildings and in place of disused plant rooms.

Another new home, which was partially slotted into old oil tank rooms, pops out of the older building to provide roof terraces for flats above.

In total 15 homes were added to the site. Seven of these were created for social rent, the most affordable tenure of housing in the UK, with the rest for market sale.

The additional homes form part of the wider series of improvements to the estate, which included refurbishing many of the existing flats.

"We saw the location and design of the new homes as integral to achieving wider estate improvements so these were doing a lot of the hard work," said Brownfield.

"We then tried to find simple solutions that would have a big impact, for example, the removal of timber louvres along the ground floor elevation of two blocks, giving existing residents front gardens onto a new street instead of a corridor."

As part of a rethink of the Gospel Oak site, the studio made improvements to the estate's layout so that people would be encouraged to walk through it.

This included the creation of a new street with front gardens for existing flats that were previously only accessible via communal corridors. 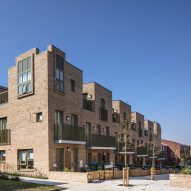 "We wanted to extend the street pattern of the adjacent Oak Village so that public spaces felt better overlooked and people might start to walk through the estate as a natural route across the neighbourhood," Brownfield explained.

"We did this by inserting carefully designed new homes and making small but impactful improvements to existing buildings – creating new streets through the estate that are well overlooked, provide the opportunity for social action and make wider estate improvements.

Brownfield hopes that Kiln Place can serve as an example of how existing housing estates can be improved and made denser without resorting to wholesale demolition.

"Hopefully Kiln Place stands as a small but very practical example of how we can densify our cities without demolition and displacement of public housing estates," she said.

"London and the UK are not alone in considering how to densify our cities and resolve some of the urban challenges of post-war estates. Look as far as Tokyo even and the same conversations are happening."

Peter Barber Architects has delivered a series of social housing schemes for London boroughs, including a terrace of homes for older people on a site in Greenwich which the studio said had previously been considered "undevelopable".

Its McGrath Road scheme in Newham recently won the Neave Brown Award for Housing 2021, given to the best new affordable housing project in the UK.

The photography is by Morley Von Sternberg.