London studio Peter Barber Architects has created a terrace of social housing for Greenwich council on a tight site in south London that was previously occupied by garages.

Designed for residents over 60, the row of housing was built on a long site, which Peter Barber Architects founder Peter Barber said was previously thought to be undevelopable.

"We've found it really interesting working on this complex little site," he told Dezeen. "It's great to be able to build much needed social housing and make a new street too. All on a site that was previously thought to be undevelopable."

The two-storey, brick housing block contains 11 apartments arranged along a new mews street. To make the most of the tight site, Peter Barber Architects arranged the homes in a "double stacked" formation, which is known historically as a Cottage or Tyneside flat.

On the ground floor, the block contains five two-bedroom homes that each have a rear outdoor space as well as a day room for the residents. The first floor contains six one-bedroom flats that are each accessible from individual stairways that lead to private terraces.

"The scheme has no wasted space in the form of common area circulation, no common corridors or shared stairs. Instead, the project's circulation is the mews itself," explained Barber.

Barber believes that arranging the homes along a pedestrianised street, rather than in a block with a single entrance, will encourage interaction between the residents and others in the community.

"The stats for loneliness and isolation amongst older people make for depressing reading," he said. "A significant proportion of older people live alone. Many have retired and therefore no longer have the social connections that come through work. Kids have left home, partners have perhaps died." 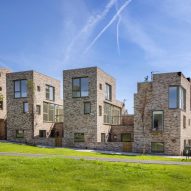 "We believe that street-based housing can help with this," he continued. "Our mews seems likely to make people quite visible to one another."

"We hope it will become a place in which residents will be recognised by one another as they go to and from their homes, and we think it is more likely that people will feel like exchanging a friendly word in a street than they would in a common area corridor, lift or stairwell of a more conventional apartment building."

Alongside the housing, the addition of the common room will also encourage interaction between the residents, although it is currently closed due to the coronavirus pandemic.

"The common room is currently locked because of the pandemic," explained Barber. "Its use will be a matter for residents – morning coffee get-togethers? Tea parties? Birthday celebrations? Party nights?"

"Wouldn't it be great if it became available to other local residents so that people living around could get to know the new people on the block – let's see," he added.

Peter Barber Architects has previously completed a large number of housing projects in London with varied arrangements and floor plans, these include a terraced tenement block of housing in Peckham, a reinterpretation of Victorian back-to-back housing in Stratford and a housing scheme fronted with brick arches in east London.