Norwegian architecture studio Snøhetta has unveiled designs for a 16-metre-tall glass-enclosed library in Beijing formed from pillars that create a forest-like canopy.

Located in the Chinese capital, the building was selected as the winning entry in an international competition to design the Sub-Center Library in 2018.

The library will take shape as a glass-enclosed structure characterised by a collection of tree-like columns that support the library's roof above.

Snøhetta explained that the columns that run through the interior were designed to reference a ginkgo forest canopy – a 290 million-year-old tree species that is native to China.

The tall linear columns will extend from ground level and then unfold and branch out at roof level into layers of abstract shapes that resemble a ginkgo-leaf canopy.

"The stepped landscape areas with the tree-like surroundings invite people to sit down and take a break at any time on their journey through the building – creating an informal zone and the notion of sitting under a tree reading your favorite book," Snøhetta said.

Each of the building's columns will be fitted with technology that aids the library's climate, lighting, acoustic performance and rainwater disposal.

The interior will boast an open, undulating plan comprised of hill-like volumes. These rolling volumes will be used to house reading rooms and add multiple staggered levels to the library that mimic the surrounding landscape.

Rows of book collections, reading spaces, a large amphitheatre and study areas will be built into and around channels and valleys within the library. 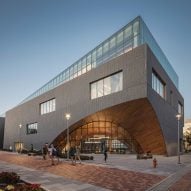 The nature of the staggered, rolling design means visitors will still be connected with larger communal spaces throughout the library.

Its zigzagging exterior glass walls continue the themes of openness and connectivity.

The roof of the building will be topped with an integrated photovoltaic system that will provide the Beijing Sub-Center Library with renewable energy.

An overhang was designed to surround the perimeter of the building to reduce the solar gain of the interior.

Snøhetta reduced the library's glass height on the eastern and western walls, while sun-shading systems cover the southern and western sides of the building's facades.

The Beijing Sub-Center library has broken ground and is set to be completed by end of 2022. When complete, the project will become China's first self-supporting glass-facade project, the studio said.

Other libraries designed by Snøhetta include a building in North Carolina that features a swooping, ceramic-clad facade with carved-out terraces.

In 2019, the studio completed the Charles Library for Temple University in Philadelphia with curved wooden entrances.