Industrial design studio PriestmanGoode has created the interiors for a fleet of trains in Canada, which have a focus on accessible design.

The London-based studio designed the interiors for a fleet of trains called Corridor that is run by rail transport company VIA Rail Canada.

Corridor trains will travel through the Quebec City – Windsor corridor, a route that spans one of Canada's most industrial regions.

Described by PriestmanGoode as "barrier-free", the inside of each train is intended to be an accessible environment for all passengers, with comfortable seats and spacious footwells.

Corridor trains also feature clear wayfinding devices in each carriage, such as glowing overhead screens and clearly signposted seat numbers listed on the top lip of each chair.

Information is also presented in braille for blind and partially sighted passengers.

A grey colour palette is combined with a Canadian maple hue to give the interior a touch of warmth, used in different shades on ceilings, carpets and seats.

Train seats in both business and economy class are fitted with headrests and armrests, as well as coat hooks, tables and charging units.

Accessibility was also considered in the train galleys, which were created as wide-open spaces that allow staff to serve refreshments with ease. 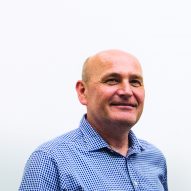 According to PriestmanGoode, the train interiors are also designed to be sustainable, with water refill points that were installed to minimise the use of plastic bottles onboard.

"Particular attention was paid to the selection of durable materials to ensure the interiors are built with longevity in mind, contributing to VIA Rail's sustainability commitment," said the design studio.

As well as the fleet's interiors, PriestmanGoode also designed the livery across the exterior of each train, which features a bold red graphic of a Canadian maple leaf.

The Corridor fleet is expected to go into service from October 2022, following winter trials last December.

PriestmanGoode is a multidisciplinary industrial design studio known for its commitment to facilitating accessibility, through projects like aircraft seating that allows travellers to stay in their wheelchairs.

Co-founder Paul Priestman recently announced he would be departing the studio, leaving Nigel Goode in charge as chairperson.

The imagery is courtesy of PriestmanGoode.