Paul Priestman, the chair of design studio PriestmanGoode, has announced he is leaving the company which he co-founded more than three decades ago.

Priestman will leave the design studio at the end of March to start a new venture, with his co-founder Nigel Goode becoming the new chairperson of PriestmanGoode.

Priestman announced his departure at a meeting for all staff on Thursday 12 January, at which he said he had "always aimed to start something new again".

The designer said he was leaving PriestmanGoode in a "strong and growing" position and that the employee-owned company was not dependent on him for success.

"With the start of 2022 I have announced, that at the end of March, I plan to start a new venture and therefore will be leaving PriestmanGoode," said Priestman.

"I have enjoyed all of my years with PG right from its early beginnings and being part of its growth into a world-leading creative company."

"I leave PG in a strong and growing position, with a great management team, excellent leadership and the best creative people in the world," he continued. "I am also very proud that PG is an employee-owned company and that everybody at PG now shares in its continued success."

"I have always aimed to start something new again and now that PG is in such a strong and stable position it is no longer dependent upon me. It is a perfect time to let others take more leading roles."

PriestmanGoode managing director Kirsty Dias indicated there would be a continuity of approach at the company after Priestman's departure.

"On behalf of everyone at PriestmanGoode, I'd like to express our gratitude to Paul for making PG the successful, world-leading design company that it is today," said Dias. 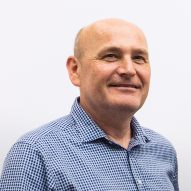 The Airbus A380 was a "dream project" that changed aircraft interior design, says Paul Priestman

"We are committed to continuing his blueprint of insatiable curiosity in the new and what's next, and simple and effective design," she continued. "We'll be working with him to ensure a seamless transition in the coming months."

"His departure is a natural extension of the employee ownership journey that Paul began in 2016 with the intention of securing PG's long-term future and success."

New directors join board as company strides through fourth decade

To coincide with the announcement of Priestman's departure, the studio also announced that two of its design directors, Daniel MacInnes and Son Tran, would be joining the board of directors. They have been at PriestmanGoode since 2002 and 2001 respectively.

The future-focused design studio is best known for its projects in transport, infrastructure and aviation.

While Priestman had become the face of the company, appearing at conferences such as Dezeen Day to talk about the future of cities and sharing his DIY egg carton smartphone holder design on Dezeen's YouTube, he and Goode founded the company jointly in 1989.

Among PriestmanGoode's recent work is Air 4 All, a system for airline seating that would allow passengers to stay in their wheelchairs, and a brutalism-inspired autonomous taxi concept dubbed the New Car for London.