Prefabricated and movable hospitality pods from US startup Moliving will make up the Hurley House hotel, which is set to open this spring in upstate New York.

A portmanteau of the words "more" and "living", Moliving is a New York-based company that offers movable pods that each contain a hotel room.

The pods, which Moliving describes as "the world's first nomadic hotel concept", were designed by an in-house team led by architect Steven Chen and Moliving's chief operating officer, Hanna Bem.

The pods are constructed in controlled facilities and then transported to the hotel property. They are meant to exist alongside permanent structures housing guest services such as food and beverage.

If the hotel's need for rooms change, the pods can be moved to a new location "without leaving a trace behind," according to the company.

"Moliving offers landowners and hoteliers the opportunity to build hotels in months versus years, at a fraction of the cost of a traditional hotel," the company said.

"With mobility in mind, Moliving's mission is to democratise the hotel industry and allow landowners to invest in their property as a hospitality destination in a more efficient and scalable manner."

The first property, Hurely House, is slated to open this spring on a 55-acre (22-hectare) site in the Hudson Valley town of Hurley. A model unit was completed in the fall, and the full hotel will comprise 60 pods.

The property is a joint venture between Moliving, which owns the units and will serve as the hotel operator, and Luxembourg-based Arizona Investissements, which owns the land.

The pods are being constructed by SG Blocks, a Brooklyn-based modular fabricator.

The units can stand alone or be grouped together. They feature slightly pitched roofs and facades that can be clad in different materials, depending on the location. The Hurley House pods are wrapped in recycled wood.

"They may be custom-designed based on the chosen locale through the use of innovating panelling systems," the team said of the pods.

Inside, there are distinct areas for living, sleeping and working. The cabin's built-in king size bed can be converted into a pair of twin beds.

The pods each have a full bathroom but no kitchen.

The team placed an emphasis on ushering in daylight.

"Floor-to-ceiling and transom windows throughout the unit, along with an oversized skylight in the spa-inspired bathroom, allow guests to soak in the views," the team said.

All units come equipped with a smart television, wireless speaker, USB ports, a safe, a private bar and electronically controlled shades. High-tech elements include a UV sanitisation station and a tablet control system. 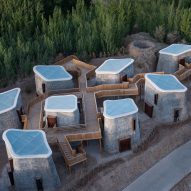 "Moliving is also in the process of creating a mobile application that will provide an interface for all unit guests to handle all front- and back-of-house lodging functions, from check-in to requests for additional pillows," the team said.

The cabins can be tied into public utilities or operate independently from them.

Rooftop solar panels generate energy, which is then stored in a lithium battery. Each unit has its own water recycling system, the team said.

"Each Moliving unit can be fully self-sufficient, with the ability to be set in an ‘off the grid' setting or connected to the host property in a matter of minutes," the team said.

The company hopes to expand beyond New York and is seeking partners in popular American locales such as Vail, Colorado, and Lake Tahoe, Nevada. Beyond the US, the company is eyeing countries such as France, Italy and Spain.

Moliving is particularly interested in seasonal destinations, where hotel occupancy rates tend to rise and fall.

"With mobility in mind, Moliving can predict seasonal demand and adjust room inventory to match demand in real time," the company said.

Other prefabricated dwellings for hospitality use include a rentable, micro cabin by Danish retailer Vipp that is located in a Swedish forest.

The photography is by David Mitchell.