Vives St-Laurent aimed to retain many of the existing early 20th-century features, including the staircase, original plaster mouldings and fireplace, while making significant changes to improve the two-storey house in Outremont, Montreal.

"We opened the kitchen to have a better view with the other spaces like the living room and the dining room," co-founder Lysanne St-Laurent told Dezeen.

"This intervention also creates better circulation in the house."

"We have also changed the entrance to the staircase which was previously in the kitchen area," she added.

"This allowed us to save more space for cabinets. We have also enlarged the access to the terrace and changed the French windows for a sliding door."

Vives St-Laurent created a simple interior that could function as a blank canvas for the clients' accessories, which included artworks and vases.

The studio chose to work with a white and grey colour palette to highlight the home's original elements, including the staircase, the mouldings and the white fireplace.

To contrast the pale colours, the studio restored the house's dark-coloured American walnut floor to its original state.

The dark wood of the floor also looks striking against the customised white-oak furniture pieces, which include a dining table and a large bookshelf that adds extra storage to the dining room.

In the kitchen, the studio used quartzite Taj Mahal stone, creating an elegant splashback above workspaces clad in the same material.

"The soft gray kitchen is a bit darker than the wall finish, so it pops," St-Laurent said. "The gray and green tones of the stone give depth but remain simple." 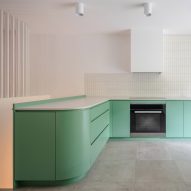 "We think the project is simple without being simplistic, because we take time to balance all the details so there is a seamless feel," she added.

The studio worked with architecture studio Pelletier de Fontenay to remodel the basement part of the house and restore its back facade.

To enhance the visual connection with the yard outside, it added a large sliding door and enlarged the window above the kitchen sink.

"The architect chose an anodized finish for the window so it wouldn't be drastic like a black framed window would be," St-Laurent explained.

"The finish changes with natural light and creates a softer setting to capture the nature of the backyard."

Other recent Montreal interior projects on Dezeen include a 1920s apartment with contemporary finishes and a historic house with Japandi elements.