Horden Cherry Lee designed the 225-metre tall skyscraper to take advantage of its prominent location on the banks of the river Thames and at the end of Middle Dock, directly opposite the main entrance to the Foster + Partners-designed Canary Wharf Underground station.

"Newfoundland has a landmark location, it's next to the river with high visibility from the east and west," said Horden Cherry Lee co-founder Billie Lee.

"It is situated at the head of Middle Dock where once the most prominent dock buildings stood," he told Dezeen. "Our challenge was to re-create that grandeur in a modern way, responding to the current and future tall building and changing cultural context of Canary Wharf."

Named Newfoundland, the building is wrapped in a diamond-shaped exoskeleton that forms the structure of the skyscraper.

Along with adding visual interest to the building's exterior, the structural exoskeleton was created to allow the 58-storey-high tower to be built directly above an Underground train line tunnel.

"We evaluated how to make best use of the ground-bearing capacity near the tunnels and further away, to make the tallest possible structure," said Lee.

"We knew the construction had to be relatively lightweight, and we also had to find a way to transfer the building’s loads to the limited locations around the tunnels," he continued.

"Our solution was to design an external diagrid, that is naturally a stable structure for such a slender building. This allowed us to transfer forces away from the tunnels."

According to the studio, if the skyscraper had been designed with a more traditional structure, where the majority of the building's weight and wind load was supported by a central core, it would have had to be 30 per cent shorter.

"This was clearly the most important innovation that allowed us to efficiently maximise the height of the building just inside the aviation restrictions, and it gave us a dynamic building structural solution with great aesthetic potential for the architecture," added Lee.

The structure is expressed on the exterior of the skyscraper and clad in silver aluminium to give the building a distinct identity.

"Newfoundland is a sculpture for the city, the diagrid concept gives the building a highly visible long-range identity and texture," said Lee.

"On a smaller scale, the profiled diagrid cladding gives the building a subtle texture that sometimes sparkles."

In total, the 72,248-square-metre building contains 636 apartments that will be rented out by developer Canary Wharf Group.

The building, which is the tallest build-to-rent (BTR) project ever completed in the UK, is part of a strategy to increase the number of residential properties in the largely commercial Canary Wharf district.

"As our residential neighbourhood grows, we’re keen to create a careful balance of BTR buildings and open market sale buildings – currently we offer three of each tenure," the developer told Dezeen. 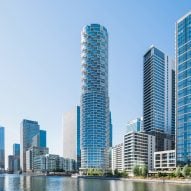 "This helps to attract a wider range of residents to the estate, some of whom may go on to buy an apartment here having originally chosen to rent," it continued.

"More broadly, this iconic building is helping to establish Canary Wharf as a major hub of BTR activity, alongside our other rental buildings 10 George Street and 8 Water Street."

Alongside the apartments, the building contains a club area on the lower levels with spaces for co-working, as well as seating areas, private dining spaces and a games room.

There is also a gym with views across the Thames and outdoor seating and children's play areas. A restaurant is set to open on the first floor later this year.

The Newfoundland building is the latest skyscraper to be built on the Canary Wharf estate, which is centred on the One Canada Square skyscraper designed by Argentine-American architect César Pelli.

The photography is by Edward Hill, Peter Matthews or Sean Pollock and courtesy of Vertus / Canary Wharf Group.