The documentary series, which can be watched on streaming site Netflix, provides insight into the achievements and contributions made by designers based in the West African country.

Each episode uses in-depth interviews to explore the process and work of the creatives. From CM Design Atelier architect Tosin Oshinowo to Moe+ Art Architecture director Papa Omotayo, the series is intended to shine a light on the power of design coming out of Africa, or what Ogufere refers to as "the womb of creativity".

"Africa is the womb of creativity – this is my belief," Ogufere told Dezeen. "So it [the series] is about sharing that with the world: for me that was important."

Ogufere argues that the coronavirus pandemic created a shift in the way contemporary Nigerian design is created, consumed and celebrated. Thus the timing of the series was crucial.

"Covid made people stop and think and design," she explained. "I was always so bored so I was like: 'okay, let's go again, let's get these people to begin to think and get the people in the [African] continent to share their ideas." 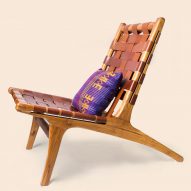 As an African interior designer, the Design Week Lagos founder was keen to use her position to allow the designers to tell their stories.

"It was very important that they felt comfortable enough to be able to share their story," she said.

"I've been in the industry for quite a while – over 20 years," she explained. "I know a lot of these designers that only came into the industry five years ago, and it was about getting them to be comfortable."

Ogufere is currently working on season two of the series, which will broaden its reach and cover design from across the African continent.

Below, she chooses five designers from the current series that believes deserve wider recognition:

"For me, Lani is a curious designer. She moved from New York back to Nigeria and she was literally going to villages to research how to preserve culture.

"We had a lot of crafts in Africa, especially in Nigeria but most of these crafts are lost now because there's no use. For instance, when I was growing up, we had so many mat weavers. But most of these are gone because it passes on from one generation to the other and no one wants to do them anymore.

"Her furniture and lighting pieces, including the Talking Stools and Tables (pictured), celebrate West African elegance with a contemporary sensibility. I really like her organic forms."

"We have a new generation of people that are interested in identity, and Seun is someone who is taking it beyond just architecture. He is designing a very interesting museum right now in Lagos which is on the Yoruba heritage (pictured). It's called the John Kennedy Randle Centre.

"There's so much architecture with no soul whatsoever because people are just churning out things. But he's been working on this project for a while and I've seen them work. I've been there a couple of times and I've seen the passion of seeing the research that has gone into this one project. I'm really excited to see the outcome."

"Tosin is a force. She's not really been in the industry for very long but she is well known across Nigeria for her bright, airy beach homes including Fowóralé House (pictured).

"She doesn't take no for an answer. Tosin is: 'give me a place to stand and I'll take the world'. I admire what she's doing and I know that she's going to go places."

"Papa is an award-winning architect. We call him 'The Artchitect' because he absolutely loves the arts and he's been doing quite a bit with the likes of Yinka Shonibare.

"He also designed Falomo Under Bridge (pictured) and Rele Gallery in Lagos, which was quite important because they took an abandoned building and they turned it into a gallery."

"Tola owns Bogobiri. She is an award-winning interior designer and entrepreneur focused on contemporary commercial and residential spaces including Bogobiri House (pictured).

"She designs by drawing on African art and culture. I know they call it different things such as Afro minimalist and all that, but I think why she's quite interesting is that she's been able to design both traditional and contemporary African design styles."