Dezeen teamed up with The World Around to live-stream its 2022 summit. Watch the third session above, which featured talks with Monument Lab and designer Miriam Hillawi Abraham.

The World Around 2022 is a day of live architecture talks taking place at the Guggenheim Museum in New York.

The third and final session of the summit was presented by the Guggenheim museum' s deputy director Cyra Levenson and focused on how opinions towards monuments and ecological preservation have changed over the past year.

A series of experts took part in the session such as Sandi Hilal and Alessandro Petti of DAAR who shared a campaign to recognise the world's oldest refugee camp, Dheisheh, as a UNESCO World Heritage site.

Filmmaker Matthew Heineman presented The First Wave, a documentary exploring the effect of the pandemic in New York.

Public art studio Monument Lab spoke about the National Monument Audit, a survey assessment of the monuments across the United States, the first of its kind.

Finally architect Paulo Tavares presented his argument that forests and trees can be considered monuments.

This year's summit is co-presented by the Guggenheim Museum and Het Nieuwe Instituut in the Netherlands.

The first and second session of today's event were live-streamed on Dezeen earlier today. 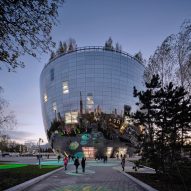 You can check out the full lineup of talks here.

The World Around took place on 5 February. See Dezeen Events Guide for an up-to-date list of architecture and design events taking place around the world.

This article was written as part of a partnership with The World Around. Find out more about our partnership content here.