Every room was oriented toward views in this house by American studio Butler Armsden Architects, which was designed for a couple transitioning into retirement.

It was built as a retirement home for environmental activists who have lived in San Francisco for over 30 years.

"The couple sought an art-filled, earnest abode that would honour the area's wild beauty," said Butler Armsden Architects, which is based in San Francisco.

"The placement on the site was deliberate," the studio added.

"The house was edged up as far as allowed on the very slight bluff to capture western views."

Large stretches of glass – including steel-framed, casement-style windows – give almost all the rooms extensive views of the surrounding landscape.

"The house was constructed with the vistas in mind, and every single room is oriented toward looking across the water and at the world outside," said the studio.

Within the home, there is a clear separation between public and private zones.

The central portion of the house encompasses an open-plan area for cooking, dining and relaxing.

Flanking the central volume are two wings. One contains the main suite and a bedroom, while the other holds a study, a mudroom and a garage.

For the interior design, the team took a restrained approach, drawing inspiration from modernist work by Mexican architect Luis Barragán.

"The clients were enamoured with the work of Luis Barragan," the team said. "They wanted a very modern aesthetic – clean lines but with a warm and timeless feeling."

Many of the home's functional elements, like solar shades and screens, are concealed within the walls. Mouldings, casings and baseboards were avoided, and large pivot doors are free of hardware.

Even the kitchen was designed with minimalism in mind, the team said.

"The alcove kitchen was designed to provide the functional essentials, but we stripped back the more typical storage components — even the refrigerator location — to avoid clutter and allow for artwork," the architects said. 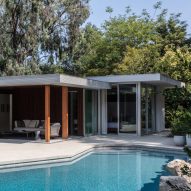 For the home's material palette, the team used earthy finishes such as English oak flooring and creamy plaster walls to form a "quiet canvas".

Other featured pieces include a vintage Stilnovo chandelier, tables by California designer Jesse Schlesinger and artwork by the homeowner.

Outside of the home, there is limited foliage immediately surrounding the house due to fire restrictions in the area. Native plants, such as Ceanothus bushes, help the property blend with the wild terrain.

Butler Armsden Architects has completed numerous residential projects in northern California, including the Valley of the Moon house, which consists of cedar-clad volumes organised around a courtyard, and the overhaul of a 1970s coastal home in the famed Sea Ranch development in Sonoma County.

The photography is by David Duncan Livingston.