Called Waf Kiosk, the six-piece structure is currently located at the Wafflesncream (Waf) store in the Nigerian city, where it houses the brand's collection of skateboarding apparel.

Marcus-Bello's design pays homage to Lagos' local streetwear sellers and the ways in which independent retailers have devised their own stores from which they sell.

"Leaning toward the evolution of the brand and its use of natural materials and tones, the idea was to design a space that would embrace a singular and humble material, in this case, bamboo," Marcus-Bello told Dezeen.

"While the kiosk is in use, clothes are hung above eye level to pay homage to 'Okrika' – Lagos' streetwear vendors who have created an architectural archetype to the selling of bootleg and secondhand clothing across Lagos," he added.

Waf Kiosk is built from tubular steel and bamboo – a sustainable plant that is known for its natural lightness and flexibility as well as its strength. The tubular steel was used to construct the frame of each modular structure, while the bamboo was used to wrap around the final design.

Marcus-Bello sourced the bamboo from Badagry, a coastal town that straddles the outskirts of Lagos and the northern bank of the creek stretching to Porto-Novo, in neighbouring Benin.

The designer became interested in the material following a research trip to the Beninese captial where he saw that many shop and home frontages featured bamboo blinds called kosinlé.

He was particularly attracted to the "beautiful silhouette effects" the blinds had on the people behind them. 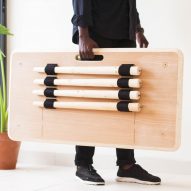 "During a research trip to the Benin Republic, I was driving from the capital city Porto-Novo to Cotonou," Marcus-Bello explained.

"As we drove to the main road leading to Cotonou I noticed these locally made blinds used to cover the front of wooden kiosks that sold confectioneries and windows of the homeowners as well."

"I tracked down a local maker and bought two of the blinds and brought them to Lagos with me" he continued.

The use of bamboo strips also means that the structure can easily be transported to different locations.

The six triangular structures can also be assembled into multiple variations, creating what Marcus-Bello calls "a variety of experiences" for shoppers.

"One thing that stood out to me in our conversation was the necessity for modularity for both form and functionality," the designer said.

"Using one, two or three pieces you can create different setups, which allows the brand to have two or three activations across the city during busy seasons."

"The final design is able to create a variety of setups allowing modularity in not just its form but its experience," he added.

Due to the bamboo's versatility, the material has been used to create pavilions all over the world.

Architecture studio Kengo Kuma and Associates built a pavilion with a textile roof supported by bamboo stalks at a temple in Kyoto, Japan, while artist Morag Myerscough installed a colourful bamboo structure in a park in London.

The photography is by Jide Ayeni.