Swedish furniture maker Offecct has unveiled two new pieces by designer Pauline Deltour, the first created since her death last year, as her family and colleagues vow to take her final designs into production.

Launched at Stockholm Design Week, the Pauline chair and Thelma screen divider were designed by Deltour for Offecct, but had not been put into production when the French designer unexpectedly died at the age of 38 on 10 September 2021.

The launch of the chair and sound absorber form part of her family and colleagues' plan to launch her final designs. They also hope to introduce an award in Deltour's name to be given to emerging female designers.

"When Pauline passed away five months ago, it was really unexpected," her husband Nicolas Tiry said at the collection launch in the Swedish capital.

"Pauline's studio is ten years and in those ten years, she had 35 clients, 50 collections and 180 products released," he added. "She created and imagined such a wide range of products."

After Deltour passed away, Tiry decided to put his job in the film industry on hold to take care of her studio. Together with her colleague Claire Pondard, Tiry is now working on finishing her projects.

"There were so many projects in the pipeline, I felt I had to do something – it was something we needed to do to complete the project, because there was no way for me that her work would stop like this," Tiry explained.

He and Pondard are collaborating with other designers and friends of Deltour to complete the projects that were underway when she passed, with the Offecct one the first to launch.

"With Offecct, we felt relieved to find people who had the same goal and aim that we had, to finish the project to honour Pauline," Tiry said. "To honour Pauline is what drives us today."

Deltour's designs for Offecct were created based on the idea that we need more flexible office spaces than before.

The two pieces are Pauline, a "modern take on a club chair" and Thelma, a sound-absorbing screen divider that "takes the standard acoustic screen divider and turns it into a design product," Offecct design lead Tobias Strålman said. 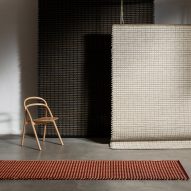 The products were developed from a series of drawings and prototypes that the designer created before she died.

"They immediately understood Pauline's intention and took care to respect the precision of the drawings that she made," Ponsard said of Offecct.

Offecct project is first to launch

Tiry and Deltour's studio plan to release a further 10 projects that Deltour was working on.

"We are very proud, happy and excited to show the project today," Tiry said. "This is the first project that we release since Pauline passed away, so it's an important moment."

"We are finishing the projects and we have also dived into the archive, and have discovered a couple of projects and are reaching out to clients to discuss the possibility of launching them," he added.

"But after that we will not be accepting any new projects – there is no reason."

Tiry and Deltour's studio hope to also honour her with an exhibition and an award in her name.

"We will work on an exhibition and are discussing with the school where Pauline went about doing something special, maybe an award for female designers," Tiry said.

"Something that would make sense for a young designer because I think it's important as a woman and as a designer in the world that's changing now, to keep her in mind," he added.

"I think she would have continued and have a special place – she has a special place, but it was just the beginning. We will try with our strength to make something special – as special as she was."

Deltour had a diverse portfolio that spanned furniture, product, jewellery and transport design. She had previously worked with brands including Hem, for which she designed a rug made from rope, and Established & Sons, with which she created the range of graphic Bloc tables.

The photography is by Björn Ceder unless otherwise stated.

Stockholm Design Week is taking place in Stockholm from 7 to 13 February. See Dezeen Events Guide for an up-to-date list of architecture and design events taking place around the world.