The Royal Institute of British Architects has urged the UK government to retrofit over three million homes in England to help cut carbon emissions and tackle fuel poverty.

In a report named Homes for Heroes, the professional body calls for a national programme involving the insulation of 3.3 million houses built in England's interwar suburbs between 1919 and 1939, which are usually poorly insulated.

According to the Royal Institute of British Architects (RIBA), the fabric-first retrofit of these dwellings could cut England's total carbon emissions by four per cent per year.

This is the "same amount as completely decarbonising [England's] waste and recycling sector" and could play a key role in helping to meet the UK's 2050 net-zero carbon target, RIBA said.

"There can be no further delay"

To carry out the mass retrofit, RIBA has suggested a National Retrofit Strategy programme, which prioritises insulating walls and installing heat pumps at homes in interwar suburbs.

Introducing tax levers, grants and allowances and other policies to incentivise private landlords to improve the homes they own would also play a key part.

"There can be no further delay in embarking on a national programme of home retrofitting, which will transform UK housing, creating warm and cheaper to heat homes while bringing health and wider societal benefits."

Built between the end of the first world war and the beginning of the second world war, interwar homes make up over 15 per cent of England's housing stock. Examples include Becontree estate in east London and Kingstanding in Birmingham.

The homes are the target for the report as they are among the worst insulated in England – accounting for 12 per cent of the total carbon emissions produced by the country's housing each year.

This is due to a combination of "poor insulation, solid wall construction, and high gas reliance", RIBA said, which means just 10 per cent of interwar homes achieve an Energy Performance Certificate (EPC) above C.

An EPC is a measure of the overall efficiency of a home, for which the best rating is A and the worst is E.

However, as many of these homes have repetitive designs and construction, RIBA believes they are "the perfect property type" for mass retrofit and can be easily improved.

Improving the energy efficiency of interwar homes could minimise fuel poverty faced by their occupants – 17 per cent of which faced fuel poverty in 2021, exceeding the national rate of 13 per cent, RIBA revealed.

Additionally, if current band D-rated interwar homes were retrofitted to achieve band C performance or better, the drop in energy usage could save households almost £500 per year.

"Implementing decarbonisation measures across homes in an area can catalyse wider change in community engagement and employment programmes," the RIBA president continued.

"In light of recent gas price increases, moving to low-carbon heating such as heat pumps could make a significant difference to residents of interwar homes." 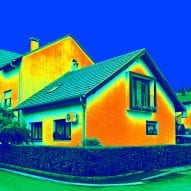 RIBA also argues that a National Retrofit Strategy could create thousands of green jobs, with the external insulation of England's interwar homes creating 5,000 jobs every year for the next 10 years alone.

"With the UK economy having suffered the worst recession since records began, the case for public investment to stimulate economic growth and create jobs has rarely been stronger," Allford concluded.

"The government must act now to support the residents of these homes and follow through on their net-zero target."

RIBA's report echoes comments made by Hayden Wood, the CEO of renewable energy supplier Bulb, who recently told Dezeen that the UK needs to drastically improve its "poorly insulated, draughty" homes if it is to eradicate its carbon emissions.

'The number one thing holding the UK back is the quality of its housing stock," Wood said. "Our houses are poorly insulated, draughty."

Homes for Heroes follows the RIBA's Built for the Environment report that it issued in collaboration with Architects Declare. The report sets out ways to decarbonise the industry and calls on governments to overhaul building codes to better regulate the energy performance of buildings.

However, leading UK architecture studios including Foster + Partners and Zaha Hadid Architects are yet to join the signatories. Foster + Partners said that this is because it contradicts the Paris Agreement treaty on climate change.

The main image is by Zinc Media, courtesy of RIBA