Images have emerged of Foster + Partners' revamped design for Two World Trade Center in New York City, which reveal a building with stepped sections and tree-covered terraces and balconies.

The leaked renderings showcase the latest version of the tower, which will be one of the final components of the World Trade Center complex in New York's Financial District.

They show significant alterations to the studio's previous designs for Two World Trade Center, with its glass exterior now broken up by green terraces and balconies.

However, these renderings are "premature," according to Dara McQuillan, chief marketing officer at Two World Trade Center developer Silverstein Properties.

"We haven't finished designing the building," he told Dezeen.

Foster + Partners' original design for the tower was first revealed in 2006 and then featured a slanted diamond-shaped top.

This was abandoned in 2015 and replaced by a design by Danish architecture studio BIG before developer Silverstein Properties handed the project back to Foster + Partners to be reworked.

The new images, as seen in The Architect's Newspaper, show how the tower will be divided into a series of different vertical elements that step down from the tallest, which is projected to stand 1,350 feet tall.

The vertical sections are divided by metal fins that run the height of the building, sticking out from the exterior.

The tallest faces of the tower have cut-outs that form terraces, while shorter vertical elements cascade in setbacks on the east side to create open-air balconies.

These connect spaces inside the building, including a covered concert hall, with the exterior. Green roofs cover the top three elevations.

The structure will be developed by Silverstein Projects using a pre-existing foundation. Currently, the site of Two World Trade Center serves as an additional entrance to the PATH subway station.

The 2006 project was originally dropped because of the changing needs of the prospective tenants, which included Rupert Murdoch’s Fox Corporations.

The BIG design, also featuring a stepped exterior, was thought to be more suitable at the time for production studios. However, after those deals fell through, the responsibility for the design shifted back to Foster + Partners in 2020. 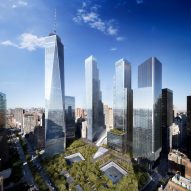 At the time, Silverstein Properties founder Larry Silverstein told the New York Post that the tower was "being significantly modified to be more reflective of contemporary needs and taste".

Two World Trade Center will join buildings designed by Maki and Associates, Rogers Stirk Harbour + Partners, and SOM in the complex, which was planned by Polish-American architect Daniel Libeskind.

The area has undergone extensive reconstruction since the Twin Towers and buildings close by were destroyed during the 9/11 terrorist attacks. In 2021, Dezeen reflected on 20 years of rebuilding the World Trade Center site.