British designer Es Devlin paid tribute to the Californian city of Compton through architectural iconography for the stage design of this year's Super Bowl show.

Devlin "cast buildings as characters" for the set of Super Bowl's halftime show, which took place at the HKS-designed SoFi Stadium on Sunday and featured high-profile artists led by Compton native Dr Dre, who worked with Devlin on the design.

"We cast each of the buildings as characters in the narrative," Devlin told Dezeen.

"The buildings are placed within the map along Rosecrans Avenue," she said. "The stadium floor cloth is printed from high-resolution aerial photographs of Compton, supplied by Google Earth, with more detailed photographs taken by a local helicopter pilot."

The Compton Courthouse jail, the Martin Luther King Memorial and legendary nightclub Eve After Dark were among the significant landmarks referenced throughout the performance.

Barbershops, burger joints and residential houses also appeared on the stage, while lightweight cardboard box props referenced the cardboard often found on the streets of Compton.

Devlin worked closely with the halftime show's producer, Dr Dre, who wanted the stage to look like an art installation as well as an arena for the performance.

"Dr Dre was immediately interested in the idea of 'placeness' –  he sensed that Compton would be a protagonist in the work and that we could etch a map of Compton on the global Super Bowl stage," said Devlin.

The stage was constructed in just eight minutes

The set is made up of white boxy trailers or 'buildings,' upon which the performers sing and dance. The floor was formed of a fabric floor map that could be rolled out in an instant.

Lowrider cars – vehicles that are commonly seen cruising around downtown Compton – were driven onto the stage, transforming the arena from a pitch to a theatrical stage. 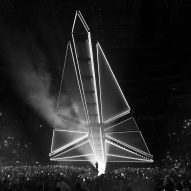 The Super Bowl set is often limited by the fact that it has to be assembled at the venue and easily broken apart in time for the second half of the football game. In total, Devlin's set was constructed in just eight minutes.

"Bruce Rogers is the veteran Super Bowl production designer who masterminded the design to be able to appear within eight minutes and disappear within six minutes – an immense challenge requiring military precision and crew choreography," explained Devlin.

"The set-up is in fact a show in its own right," added the designer.

During the halftime show, Dr Dre stood on the roof of a trailer designed to look like his recording studio. Rows of lights within the audience were meant to echo the rows of dials and sliders on his recording desk.

Over the course of the show, he was joined by popular artists including rappers 50 Cent, Eminem and Snoop Dogg, who performed upbeat tracks including Next Episode and In Da Club.

"The recording studio is Dr Dre’s link and meeting point with all the other artists," explained the designer. "Much of the lived experience which informs the music heard during the show has passed through Dr Dre’s desk and hands."

"The map of Compton courses through the record producer’s hand as it hovers over the dials and switches on the 48-track recording desk," continued Devlin.

According to Devlin, each of the venues offer visitors a multifaceted and engaging experience of the Compton music scene.

"At the start of the project, Dave Free introduced us to his Compton school friend Tremeal who took us on a tour last year," Devlin said.

"With Tremeal's guidance we began to get a sense of the complexity of this city which has produced an exceptional number of leading figures in politics, sports and music," she added.

Es Devlin is responsible for a number of high-profile stage designs, including The Weekend's Coachella music festival stage and the set of band U2's 2018 tour.

Photos are courtesy of Es Devlin. The video is by Hamish Hamilton.