Fashion editors and influencers assumed digital avatars to take up their front-row seats at Jonathan Simkhai's Fall/Winter 2022 runway show, which was presented in the virtual world of Second Life during New York Fashion Week.

The show featured ten looks from the designer's latest physical collection that were turned into virtual wearables and modelled by characters within the online platform.

After first going on sale to Second Life users, who can use the digital garments to dress their own avatars, six of the pieces are being auctioned off as non-fungible tokens (NFTs) for use in other 3D virtual environments.

The day after the virtual event, Simkhai presented the full physical ready-to-wear collection to journalists and buyers by appointment in New York, rather than staging a real-life runway show.

"I really wanted to break the ice and figure this new world out and try to expose my customer to it, but also acquire a new customer," Simkhai told Vogue.

"It's not like I was doing one instead of the other; it was business as usual with an extra fun layer."

Rather than transporting viewers to a surreal environment that would be impossible to recreate in real life, this consists of a traditional linear grey runway, surrounded by shallow pools of water. 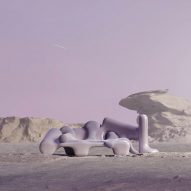 Dezeen's top 10 designs for the metaverse from 2021

This involved taking the real-life garments from the designer's FW22 collection and creating 3D models of them with the same software that is used to design video games.

A slew of fashion brands from Balenciaga to Nike has recently started investing in virtual wearables and NFTs as a way to sell products to more people.

Companies are also quickly beginning to look beyond just garments and towards creating immersive experiences in the growing network of virtual worlds called the metaverse.