Construction is set to begin on Paris' first urban cable car, a 4.5-kilometre-line that will connect several suburbs in the southeast of the city to the Metro system.

Named Câble 1, the system will link the suburb of Villeneuve-Saint-Georges with the Créteil Pointe du Lac station on Paris' Metro line 8.

Construction will begin later this year, reported French newspaper Le Parisien, with the system scheduled to open in 2025.

In total, 33 Y- and V-shaped pylons will be built along the route to support the overhead cable car line. Each cabin will seat ten passengers, with the system expected to transport roughly 1,600 people per hour at its busiest times.

"The great proposal of the group led by Doppelmayr France will allow, in just over four years, more than 11,000 people per day to save a lot of time, a lot of comfort and perhaps, to dream a little in the mountains." 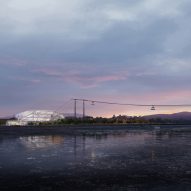 The cable car system was chosen due to the hilly terrain in the suburbs, which has limited the creation of metro and trains lines.

The stations will serve a number of different communities and each will have its own unique design elements.

At the Pointe du Lac terminal in Créteil, a footbridge will connect the station with a nearby mall while the Bois Matar terminal in Villeneuve-Saint-Georges will be designed around preserving the views of the surrounding agricultural land.

Steps, elevators and escalators will be installed at stations located above ground to connect with the elevated platforms.

Many cities around the world have introduced urban cable cars as an alternative to ground level, or underground transport networks. The Colombian city of Medellín's 15-kilometre network being cited as one of the most successful. In 2012, a cable car line crossing the Thames river designed by Wilkinson Eyre opened in London.

Recently UNStudio announced plans for a 1.5-kilometre cable car that would span across the river IJ in Amsterdam and unveiled the world's first international cable car that will connect Russia and China.

Renders are by Romain Ghomari unless stated otherwise.