Marks Barfield Architects and Davis Brody Bond have teamed up to design an aerial "gondola" that would stretch over the city of Chicago and serve as a major tourist attraction.

Dubbed the Chicago Skyline, the cable car would transport passengers from the city's Navy Pier to the Riverwalk and Millennium Park, right by the downtown district known as The Loop. Renderings show glass-walled capsules suspended from a wire.

"The Chicago Skyline is a sophisticated, environmentally friendly aerial cable car that will be a unique urban experience," said the team.

Intended to operate year-round, the cable car service would be offered during the day and into the evening hours.

It promises a completely new perspective of the city's architectural landmarks, which include SOM's supertall John Hancock Center and the corn-cob-shaped Marina City towers designed by Bertrand Goldberg. 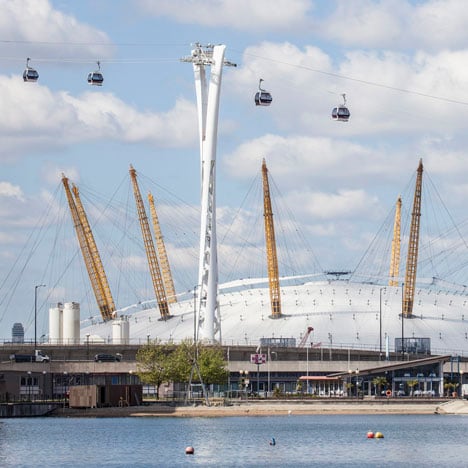 The idea stems from a 2010 competition to re-imagine Navy Pier, which extends from the shoreline of Lake Michigan and offers various dining and entertainment facilities. New York-based Davis Brody Bond submitted an entry into the competition.

"I realised that without creating an innovative mode of transport, directly connecting the Loop with Navy Pier, we would leave a trove of potential visitors untapped," said Steven Davis, a partner at Davis Brody Bond.

David Marks, director at UK-based Marks Barfield Architects, was one of the designers behind the London Eye, a giant ferris wheel along the River Thames that draws more than 3.75 million visitors each year.

"The Chicago Skyline could do for Chicago what the London Eye has done for London, and become a very identifiable landmark within the city, driving tourism and prosperity," Marks said.

The architects designed the conceptual project in collaboration with Lou Raizin, an entertainment specialist, and entrepreneur Laurence Geller.

In 2012, a cable car system opened in London. Called the Emirates Air Line and designed by Wilkinson Eyre, the aerial gondola crosses over the River Thames, terminating at Greenwich Peninsula on the west and Royal Docks on the east.

Other recent proposals for tourist attractions include a "skyslide" that would be attached to the exterior of a tower in Los Angeles.

Images are by F10 Studios.