BIG has unveiled an expansive cable-car system with two transit hubs to be built in Oakland, as part of the architecture studio's plans for a new baseball stadium in the California city.

The gondola is proposed to transport sports fans from the city centre to Jack London Square – where Danish firm BIG has designed a ballpark for the Oakland Athletics Major League Baseball (MLB) team, known as the Oakland A's.

The system will begin at Oakland's 12th Street BART Station, close to the Oakland Convention Center, and provide a direct route to the new stadium in the Howard Terminal area.

Outdoor stations at either end will anchor wire cables, which will carry the gondola cars through a white hoop atop a central post.

The stations are designed with outdoor escalators that lead to the platforms. The structures will comprise U-shaped curved volumes turned on their sides, with silvery exteriors.

Pale wood boards will line the undersides, and will carry down to form decks and waiting platforms.

The gondola ride is proposed to last around three minutes. Each car will be formed from a box-like frame surrounded by windows, and will fit approximately 35 people.

It is estimated that the system would be able to move 6,000 individuals per hour, in either direction.

The gondola is intended as a faster and easier transport solution for the city's new ballpark. Oakland suffers from vehicular congestion, similar to most cities in the US, so the system could help to alleviate road traffic on match days. 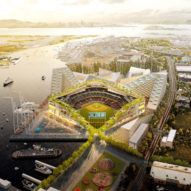 Although the cable cars are proposed for use during stadium events, they could also transport people at any time to lessen traffic. The system would also be electrically powered, to help boost the city's green credentials.

Urban cable-car systems are proposed for a handful of cities around the world – from Chicago, to Amsterdam and Gothenburg.

London already has a Wilkinson Eyre-designed gondola, which connects the O2 arena on Greenwich Peninsula to the ExCeL centre across the river at the Royal Docks – but its use has declined dramatically since it opened ahead of the 2012 Olympics.