A glass building designed in 1952 by Ludwig Mies van der Rohe has completed at Indiana University in Bloomington, more than 50 years after the German-American architect's death.

Now known as the Eskenazi School of Art, Architecture + Design, the design was adapted for contemporary use from the rediscovered plans by New York architecture studio Thomas Phifer and Partners.

It was originally commissioned by the Pi Lambda Phi fraternity at the same time Mies van der Rohe was working on the Farnsworth House.

The 60-foot-wide (18-metre) and 140-foot-long (43-metre) building is two storeys with a profile of white steel, characteristic of the 20th-century architect.

The top level is wrapped completely in glass and projects out over the concrete walls of the recessed ground-floor structure. The lower level is mostly open, with a central atrium that extends up through the second storey.

Partitioned interiors have both stark white and wooden walls, with floors of grey limestone and white epoxy terrazzo. Select furnishings by Mies van der Rohe and Florence Knoll were included.

Some aspects of the original Mies van der Rohe design were updated to conform to code. These include the addition of a staircase, hydraulic elevator, and expanded mechanical room. 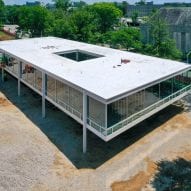 "There can be no greater inspiration for us than to learn and work in a masterpiece by this titan of 20th-century architecture," said Peg Faimon, dean of the Eskenazi School.

The original project was abandoned due to lack of funds, and the designs were forgotten.

In 2013, an alumnus and former fraternity member Sidney Eskenazi — for whom the building is named — alerted Pi Lambda Phi of the existence of the original plans, which were among the Mies van der Rohe collection at the Museum of Modern Art (MoMA) in New York.

Indiana University plans to host a panel discussion later in 2022 to celebrate the completion of the school, and the work of Mies van der Rohe – one of the best-known architects of the 20th century and the last director of the Bauhaus school.

The photographs are by Hadley Fruits, courtesy of the Eskenazi School of Art, Architecture + Design.