Architecture studio Kompas has completed a house and art gallery in Chiba, Japan, featuring a sawtooth roof and a facade clad in black tiles that are angled to create louvred openings.

Named the Nishiji Project, the residence was designed by Kompas for a real estate developer and art collector who wanted a family home that could double as his company's offices and a gallery.

The site in Chiba's historic Nishifunabashi neighbourhood was owned by the client's parents and already contained their home, alongside several old warehouses and a parking area.

Kompas positioned the new building at the opposite end of the site from the existing house and orientated the plan so the living areas look onto a quiet central garden.

"Our first approach was to organise the entire site so that the two families' lives and the workspaces coexist comfortably, arranging site circulation and developing a sloped garden moderating the level differences between the two buildings," said Kompas.

The Nishiji Project contains garages at the centre of its ground floor, while the galleries and offices are arranged vertically across three storeys on the south side facing the main road.

The client was keen for the building to engage with the neighbourhood, so the prominent southern elevation features a public entrance that invites visitors to enter from the adjacent street.

Traditional Japanese kawara tiles clad most of the exterior and were chosen to recall an old warehouse that had occupied the site since the owner's grandparents' generation.

A special version of the tiles called Kuroibushi kawara, which are blackened to resist salt damage, was used to cover the upper portion of the facades.

Most of the tiles are laid in a typical overlapping pattern, but in places where light and views are required, they are rotated outwards to form louvred openings.

The tile-clad elevations rest on a monolithic concrete base and extend up to the sawtooth roof, which allows consistent northern light to flood into the gallery and living spaces.

Behind the three-storey elevation facing the street, the building steps down towards the north to follow the local building code and create spaces with a more residential scale. 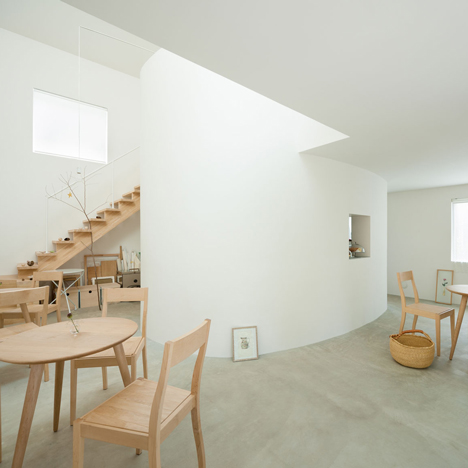 The pitch and height of the sawtooth roofs vary depending on the usage and daylight requirements of the internal spaces below.

The three uppermost windows flood the large gallery with natural light, while a bedroom and the main living space below feature openings that look out towards the garden.

An outdoor terrace at the centre of the building provides a shortcut between the living spaces and the offices. The sheltered first-floor terrace can be used as an additional exhibition space or as a play area for the children.

Several other interstitial spaces incorporated between the main rooms will allow the Nishiji Project to adapt over time, potentially providing additional galleries to house the owner's growing art collection.

The arrangement of spaces over multiple levels and the creation of rooms with varying sizes and daylight conditions enhances the building's flexibility.

Since Nishiji Project's completion, the owner made the decision to open the gallery, now named Kanda & Oliveira, to the public.

"This new cluster with the kawara facade and the sawtooth roofs begins a new era in this historical site as a generous field to comfortably mix artworks, residents, and visitors," claimed Kompas.

"We hope this architecture to be the reliable base for art and culture appealing to the world, besides supporting joyful and abundant daily life like living in a museum."

Other homes featured on Dezeen that double as art galleries include Oeuf by Flat House in Tokyo and the Cambridge Residence in Massachusetts by Stern McCafferty Architects.

Elsewhere in Japan, Apollo Architects & Associates designed the Fleuve house for a client who wanted to combine their home with a small salon space from which to operate his business.

The photography is by Vincent Hecht unless stated.