Architect Robert Adam has designed an 11-bedroom neoclassical house for an estate in the Cotswolds near the village of Chipping Norton, UK.

Named St John's House, the 6,692-square-metre home has been drafted for a 60-acre site that is currently being sold by Sotheby's International Realty.

If realised, the house designed by Adam, who was recently a director of British studio Adam Architecture, would become one of the largest new country homes in the UK.

"This would make it not only the largest new home to be built in the UK for over a hundred years, but also the only one built from the ground up," explained Guy Bradshaw, managing director of Sotheby's International Realty.

The home in the Cotswolds Area of Outstanding Natural Beauty was designed by Adam as a modern take on a traditional English country house.

"It is a classical country house, but one that moves the classical tradition forward," Adam told Dezeen.

"The house adds to the country house tradition. Traditions are not static, they move on to adapt to present needs while keeping a clear connection with the predecessors."

The home will have a central block with a classical portico in its centre, flanked by two wings extending forward.

Its three-storey main block stands above three semi-subterranean levels that would contain a gym, swimming pool and bowling alley, alongside a garage for 50 cars that is described as a car museum. A ballroom, which opens onto a terrace, would be placed on the lowest level.

The main block would contain a living room and dining room on the ground floor, nine ensuite bedrooms on the level above and two principal suites on the top storey.

While the house has many typical classical elements, it was not informed by any particular English country home and was designed to contain a number of modern details.

"Other than the fact that all country houses have certain key features – significant entrance, garden facade with outlook, carefully composed approach, main house and ancillary buildings, there is no specific country house from which this design is derived," Adam explained. 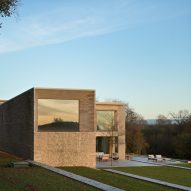 "It is both classical and modern, this is really the point, these are not incompatible," Adam continued.

"It is part of the tradition but, sometimes in quite subtle ways, moves it on a notch. You don't need to be odd to be modern."

According to Sotheby's International Realty, the planning permission for the home is the result of a "24-year journey". A previous modernist scheme designed for the site by architect Adrian James was granted planning permission in 2004 but not built.

Other recent British country houses featured on Dezeen include a stone residence in a river valley in Hampshire by Niall McLaughlin Architects and a secluded dwelling in Kent that is topped by chimney-like roofs.