Graal Architecture has renovated and extended a university refectory building in France, adding a lightweight rooftop pavilion of glass and green-painted steel overlooking the surrounding parkland.

The Parisian studio was commissioned to both update and extend the original 1993 prefabricated concrete refectory building, which sits within the Francois Mitterrand Park in Cergy.

The project was completed for the Regional Centre for University and School Works, or CROUS — an organisation which provides burseries, accommodation, restaurants and cultural activities to students across France.

Despite its prominent position at the centre of the park, the original refectory building suffered from a poor connection to the outdoors and gloomy interiors.

Graal Architecture's approach involved both opening-up and highlighting the "intrinsic qualities" of the original building, while also adding a terrace and rooftop extension, called the Kiosk, which enjoys panoramic views over the park.

"Discreetly embedded in the topography, the original building faced a paradox," said the practice.

"While benefitting from a privileged position, the refectory suffered on the one hand from a lack of visibility and on the other from interior spaces that are little enhanced by its lack of links with the outside," it continued. 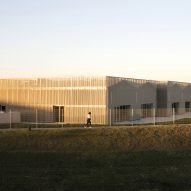 On the ground floor, sunk slightly into the ground, the "garden level" houses a large dining room overlooking the park to the north. Kitchens, bathrooms and offices wrap the southern edge of the building.

Removing a retaining wall, flattening the ground level and removing spandrels to expand the glazed areas all contributed to opening-up this ground floor space, characterised by the green-painted steelwork that frames the new windows.

"The interior is sequenced in three programmatic bands - relaxation, dining and kitchen areas - allowing the creation of a dynamic threshold between interior and exterior, notably through the new transparency of the facade," said the practice.

Inside, material choices were made to reflect the light around the space as much as possible, with a grey resin floor and glossy white tiles

"Designed as a light pavilion on a topographic mineral base, the Kiosk becomes a unifying element between the different parts of the refectory, allowing it to assert its presence while ensuring the architectural coherence of the whole," said the practice.

"Through a sober and economical design, the project demonstrates how work on an existing building can accompany the repositioning of an ordinary programme," it continued.

Earlier this year, Graal Architecture completed a multipurpose events hall that mimics the look of typical gabled houses as well as the industrial sheds found nearby.

Other projects by the studio include a kindergarten extension in France made up of galvanised steel cabins.

The photography is by Clement Guillaume.