Gravity Fatigue opened this week at London's Sadler's Wells theatre – 15 years after he used the location to present his Afterwords fashion collection.

The production is split into 18 chapters that each explore themes of identity, displacement and invisibility – scenarios often examined by the designer in his collections.

Having attended almost every performance at Sadler's Wells, Chalayan was approached two years ago by the theatre's creative director Alistair Spalding, who proposed that he directed his own production.

"Hussein and I got to know each other over a number of years, he's always here, almost every performance," said Spalding during a talk before last night's performance. "He's worked on a couple of small things with us, but then I decided in the end that I would ask him to lead and direct a project." 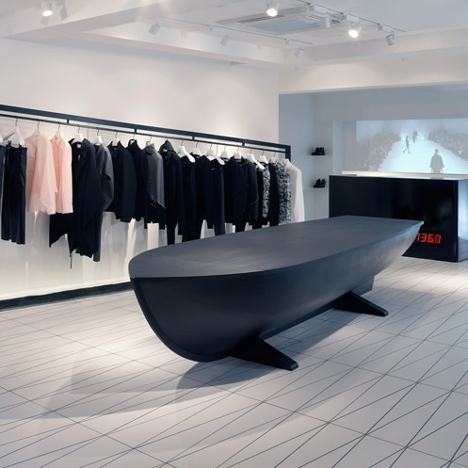 "I had been collecting ideas for many years, so the minute that you asked me already a lot of ideas were there for me," responded Chalayan. "Because I've directed films before and I've made exhibitions and installations for me it felt very natural to be working within these realms."

The designer presented Spalding with a number of images that represented different key themes. The pair then worked together to edit these down to a set of 18, which ultimately formed the structure of the production.

Chalayan then enlisted the help of Belgian choreographer Damien Jalet – who has previously collaborated with Givenchy creative director Ricardo Tisci and artist Marina Abramovic – to execute his ideas through movement.

"It was definitely a challenge to suddenly reverse and say okay I'm going to do the opposite of what I usually do," said Jalet. "I've already worked with designers before as I love to create a dialogue with costume as it changes the body and the perception of it."

For many of the sections, steps and movements were formed after Chalayan had presented Jalet with a garment representing the notion he wanted to convey.

One section of the production titled Elastic Bodies involves pairs of dancers moving within an elasticated garment – with one appearing to have control over the other.

"Because of my experience of working all these years with clothes, I know the range of movements that they can make," said Chalayan. "When I brought them over, I had of how they can be played with, and how they can be stretched out and the can be utilised in a certain way."

"With elastic bodies, I knew from the loop of the dress that it you would need two people to stretch it out," he continued. "We spoke to the cast and said this is the idea and they started to play around. There was a lot of trial and error, but we would catch moments and start to develop them."

Chalayan's childhood experience of living between Cyprus and the UK is a recurring theme throughout Gravity Fatigue, and is particularly prominent in a section titled Arrival of Departure.

"Arrival of Departure stems from an ongoing interest of mine of displacement because I was always between Cyprus and London growing up," Chalayan said. "The theme is about that gap between arriving and departing, and not knowing whether you arrive to a place or depart from a place."

The set design for this section revolves around a section of an aeroplane. Dancers appear on the stage wearing plain-coloured coats, before unbuttoning them to reveal completely sequinned garments.

"Hussein came with this very specific design of a reversible jacket," said Jalet. "We started to experiment with it until we found this centrifugal movement where the clothes were pulling the dancer and there became this kind of momentum. It felt like suddenly the dancers were being carried by the coat."

"If you look at it carefully all the coats have all the accessories in built," said Chalayan. "The idea was that you are not departing from your possessions, therefore you aren't leaving."

Chalayan celebrated 21 years in the fashion business with the opening of his first retail store in September 2015. A month later, his Paris catwalk show featured a shower that dissolved a pair of soluble outfits.

Other fashion designers that have worked with dance productions include Gareth Pugh, who created sculptural costumes for a ballet at London's Royal Opera House in 2012.

Photography is by Hugo Glendinning, unless otherwise stated.