Creative platform and foundation To.org has enlisted architecture studios Hassell and LocalWorks to create a music centre that will uncover talent in the Bidi Bidi refugee camp in Uganda.

Due to break ground in April 2022, the Bidi Bidi Music & Arts Centre will provide a platform for gifted artists based in the huge settlement, which is home to over 270,000 South Sudanese refugees.

"We want to change the narrative around refugees," said Nachson Mimran, CEO and co-founder of To.org.

"Someone once told me that talent is equally distributed while opportunity is not, and that become really apparent when I first visited a settlement in Uganda," Mimran told Dezeen.

"In one week we interacted with so much talent – athletic talent, visual artists, beat boxers, rappers – but there was no infrastructure to support them. That's why we launched this mission."

To.org has an innovative business model that combines venture capitalism with creative activism and philanthropy.

At Bidi Bidi, the organisation is collaborating with non-profit Playing for Change Foundation and NGO SINA Loketa, with the ambition to create both a community resource and a creative incubator.

The building design has been developed through a partnership between international architecture firm Hassell and Kampala-based LocalWorks, in collaboration with engineering giant Arup.

The structure will take the form of a sheltered, open-air amphitheatre that can double as a performance venue or a community meeting space.

It will provide a recording studio and spaces for music training. There will also be a tree nursery, a vegetable garden and freshwater facilities – all essentials for a community where food shortages are rapidly worsening. 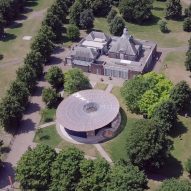 The building will collect rainwater through a huge funnel in its lightweight roof structure – similar to the Serpentine Pavilion created by Diébédo Francis Kéré, an architect who has also been involved with To.org.

"The type of structures that Francis does are really great for climate, so we learn a lot from him," said Xavier de Kestelier, a principal and head of design at Hassell.

"Instead of having a thick roof that radiates heat, this lightweight roof will actually cool down the building."

The walls of the Bidi Bidi Music & Arts Centre will be built from compressed earth blocks.

"The walls of the entire building will be made out of material excavated right where the building is being built. We will cut a terrace and start making blocks on site."

The Bidi Bidi Music & Arts Centre is scheduled for completion by the end of the year.

Mimran is confident it will make an impact on the settlement, which was only established in 2017, when South Sudanese refugees were forced to flee the ongoing civil war.

He points to a previous project in Nakivale, another Ugandan settlement, where To.org worked with locals to build a small building modelled on the 1977 Chevrolet ice cream van that once featured in a Richard Hambleton artwork.

Mimran has since seen the building being used as a meeting room, a pirate radio station and a production facility for reusable sanitary pads. 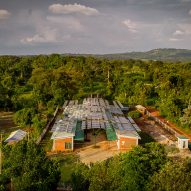 Mimran believes these areas such as Bidi Bidi need to be treated as new cities, able to thrive as long as they are provided with the right infrastructure.

"Anything we do here, we bring the same dedication, energy and quality as elsewhere in the world," he said. "That's how we change narratives."

Other recent projects in Uganda include the Mount Sinai Kyabirwa Surgical Facility, which is topped with solar panels.