Architect Marc Thorpe has unveiled renderings of a set of houses in Uganda that will be constructed almost entirely from bio-bricks made from local soil and feature solar-panelled roofs.

Scheduled for completion this spring, Marc Thorpe is working on the project with social housing company Échale and Stage Six, an organisation that describes itself as supporting businesses in becoming sustainable franchises.

The group will initially produce 10 houses of the same size just outside of Kampala, the capital city of Uganda, but hopes to expand the project in the region once this first stage is complete.

Comprised of just one storey each, the bungalows will be built from Échale's patented Ecoblocks, which are bio-bricks made of 90 per cent local soil, with a mixture of cement, sand, lime and water accounting for the rest of the material.

"This, in turn, makes it locally sourced and fully recyclable, producing 30 per cent less carbon dioxide emissions," he continued.

According to Thorpe, other sustainable features of the Kampala houses will include large, flat roofs made from corrugated steel and wood that are designed to hold solar panels that will generate electricity.

Each house's roof will also be fitted with gutters connected to an adjacent water tower so that rainwater harvested from the roofs can be stored and used.

Crucially, the houses will have a water tower each rather than relying on a communal one, in order to prevent the community from being deprived of a water supply should there be a drought.

Visitors will enter each standalone property via large terraces that will wrap around the houses' fronts and sides, which will be shaded from the harsh sun by their roofs. 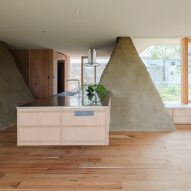 Each house will have three bedrooms and two bathrooms, as well as a kitchen and living and dining areas.

Wood-burning stoves – commonly found in Ugandan houses – will be placed on the terraces where they will be connected to the kitchens.

According to Thorpe, the project is designed to provide low-cost housing for middle- and lower-income families in Uganda, where the architect, Échale and Stage Six say there is a shortage of housing units.

"We always begin [the design process] with understanding the social, economic and environmental dynamics of a site," said Thorpe.

"We are currently working with a local developer and architect to best understand the programmatic requirements for the area around Kampala."

Thorpe also explained the reasons for using Ecoblock as the primary material for the Kampala houses, as opposed to more traditional construction materials.

"I think building based on need, using locally sourced materials and environmentally responsible methods that systemically integrate into an ecology is a sound direction," he said.

"If we plan on sticking around on this planet any longer we really don’t have an alternative. My approach to architecture is to design with responsibility and purpose."

Similar projects in Uganda that are driven by sustainability include The Mount Sinai Kyabirwa Surgical Facility, a self-sustaining building by local construction workers that is topped with a solar-panelled canopy.

The renderings are by Truetopia.