Ice falling from supertall skyscrapers in New York, including 111 West 57th Street on Billionaires' Row, injured motorists and closed roads over the weekend.

Numerous reports from New York City described incidents of ice falling from some of the city's tallest buildings.

Videos of large chunks of ice falling from the 1,420-foot (435-metre) residential skyscraper, which is also known as the Steinway Tower, were shared on social media.

The falling ice caused the police to temporarily cordon off 6th Avenue near 57th Street.

Falling ice from the Steinway Tower making a thud on impact in Midtown Manhattan. #NYC pic.twitter.com/mOXmT6TmiQ

Nearby at the KPF-designed One Vanderbilt skyscraper, more reports of falling ice caused 42nd Street to be closed in places.

Another incident resulted in lane closures over the George Washington Bridge over the weekend, and social media videos showed ice falling from the Brooklyn Tower, which is still under construction.

The widespread incidents were explained by a sudden warming on Friday, after freezing weather last week formed ice chunks on the glass buildings.

Several incidents of ice falling from supertall skyscrapers — those above 984 feet (300 metres) — have been documented over the past decade. In 2014, ice reportedly fell from One World Trade Center in Downtown Manhattan. 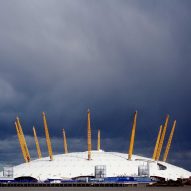 Although ice falling from skyscrapers can be traced back to the 1930s, the materials and forms of contemporary skyscrapers have exacerbated the problem, according to journalist Matthew Haag.

"The threat is greater today because of a surge in new, angular towers that reach soaring heights and are built from materials like glass and steel that actually promote more ice growth," Haag wrote in an article for the New York Times in 2019. "The acceleration of climate change may also contribute to icing issues."

Much attention has been given lately to the growing number of supertalls in New York City, and floods and high winds caused problems for the residents of Rafael Viñoly's supertall 432 Park Avenue in 2021.