The overhaul was carried out by Sheppard Robson to improve the layout and energy performance of the building that was completed by British architect Alan Short in 1999.

Sheppard Robson's goal for the project was to refresh the Contact theatre while preserving Short's original vision for the building.

Working with ME engineers at Max Fordham, the studio also enhanced the efficiency of the building's original sustainable design features, such as the chimneys that made it the first naturally ventilated theatre in the UK.

"At the heart of the brief was to extend and refresh Contact whilst carefully preserving the building and organisation's progressive spirit," Sheppard Robson partner James Jones told Dezeen.

"Overall, the refurbishment and extension together work to make the building more accessible, future-focused, economically and environmentally sustainable."

Contact was established in 1972, but its Short-designed home was created following an investment from Arts Council England in the 1990s.

The theatre and arts venue is best known for championing youth leadership and creativity. To reflect this, Sheppard Robson consulted with a group of young people associated with the theatre throughout the redesign. 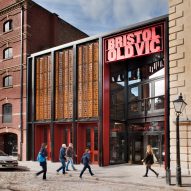 "The [co-creation] process ensured that the building continues to be more than just a space to see a performance," Jones explained.

"It is far more deeply embedded with the community and new ways of engaging young people in the arts."

The 300-square-metre extension to the theatre is designed to complement Short's original quirky design, while also boasting its own unique aesthetic.

To achieve this, Sheppard Robson covered it with standing-seam aluminium and zinc cladding that echoes details of the existing building that are also finished with metal, such as the main entrance.

"Externally, we read the Alan Short design to be a complex 'village' of forms that articulate the range of spaces within the building," Jones explained.

"We wanted to add to this with a form that was clearly new and distinct, but still part of the village – the use of materials helped achieve this."

The extension comprises three storeys and is topped by a pitched roof arranged around two ventilation chimneys that nod to those on the original buildings.

In the same way as Short's original design, these chimneys are used to naturally ventilate the extension's interiors.

Inside, the ground floor of the extension comprises performance spaces as well as a health and science development created in partnership with the Wellcome Trust.

The first floor has offices for Contact staff, while the top floor contains rehearsal spaces and workspaces for artists and cultural organisations.

Sheppard Robson's alterations to the Contact theatre's existing building included the improvement of sound insulation and circulation in the building's public areas. A new cafe and bar have been introduced at its entrance to "lift the arrival experience of the building", Jones said.

Upgrades were also made to reduce the building's overall carbon emissions, which the studio has predicted will see an annual drop of 13 per cent.

These improvements included changes in the way users can monitor and control air quality and airflow rates of the building's original natural ventilation system to minimise heat loss.

The new naturally-lit offices replace old cellular workspaces in the original building, and feature external shading to reduce overheating. All lighting has been swapped for LED technology, while an efficient central heating plant was introduced in place of 20-year-old boilers.

To track the reductions in the theatre's carbon emissions, Max Fordham will now monitor the building's energy consumption over the next two years and provide advice for optimisation.

Sheppard Robson is a British architecture studio founded in 1938 by Richard Herbert Sheppard. It has offices in London, Manchester, and Glasgow.

Other projects by the studio include the Nelson Mandela Children's Hospital in Johannesburg and a barn-style extension for a horse hospital in Edinburgh.

The photography is by Adrian Lambert.