The Unwasted collection of bags by Chinese designer Meng Du are made with an alternative leather produced from leftover grape skins.

Du created the bags from grape marc, a byproduct of wine production. Grape marc contains the skins, pulp, pips and stems of the fruit that are left after it has been pressed for wine.

Du sourced the alternative leather material from Planet of the Grapes, a French producer of materials and natural dyes made from waste grape skins.

The company produces the textile by collecting grape marc from vineyards in France and drying it under natural sunlight. It is then ground into a powder and blended with natural ingredients to create a liquid, which is poured onto a fabric of natural stem fibres and left to dry again.

"The entire process takes around four or five weeks, as it starts off with the spreading out and the drying all of the grapes in the sunshine for a couple of weeks," Sam Mureau, co-founder of Planet of the Grapes, told Dezeen.

"After the grapes are truly dried out they are then used to make the grape leather and then once transformed into sheets of material they are left to air dry, which again takes two or three weeks depending on the time of year," she said.

According to Du, the supple, lightweight material has a lightly textured feel that is reminiscent of the real fruit's texture.

"You can feel the broken down pomace under your fingers and it reminds you from where it came, and that's what adds the character to the material," the designer told Dezeen.

"The material is lightweight and flexible and it has a really natural lustre to it and each piece is unique," Du continued.

The collection contains two bags: Unwasted Merlot, a larger bag designed to look like a squashed plastic milk carton; and Unwasted Chardonnay, a smaller pack-style bag that resembles a tin can.

Du says that these shape choices are intented to draw attention to the importance of recycling. 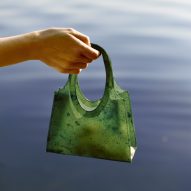 Sonnet155 is a "temporary handbag" made from discarded fruit peels

"I found that beverage cartons and cans are often squeezed into strange shapes when they are recycled and to me, this imperfection illustrates the value of a second life," said Du.

Around 1,200 grapes are used to create enough material for the large shoulder bag – the equivalent of 0.5 square metres of leather.

Du shapes the leather over a 3D-printed mould by hand in a lengthy process that takes two days for the larger bag and around 30 hours for the smaller bag. The inner lining of both is made from organic cotton.

Every year, approximately 290 million hectolitres of wine is produced around the world, but most of the grapes used in the process are then discarded and left to waste.

Du hopes that these bags will solve some of this waste problem and also encourage consumers to reconsider how their belongings are made.

"The audience interested in this kind of product may be niche, but hopefully we are moving towards making long-term investments in something more meaningful than the casual fast fashion purchase," said the designer.

The bags are created in partnership with Swedish non–alcoholic wine producer OddBird, and are currently available to pre-order ahead of on-demand production later in the year.

There is a growing trend for using fruit waste to create handbags or accessories and grapes aren't the only fruit that can be used. Banana peels were used by textile designer Youyang Song to create Peelsphere, a waterproof material for bags and accessories.

The photography is by Meng Du unless otherwise stated.