US studio Deborah Berke Partners has overhauled a pair of Victorian-era townhouses at the University of Pennsylvania and added a terracotta-clad extension that is meant to be contextually sensitive.

The building, called the Meeting and Guesthouse, is located on the Ivy League university's campus in Philadelphia. It is part of a newly established precinct with facilities geared toward campus visitors, including trustees and dignitaries.

The project entailed the revamp and expansion of two brick townhouses dating to 1898, which formerly held offices for the School of Arts and Sciences.

Creating a contextually appropriate design was a key concern for Deborah Berke Partners, which is based in New York.

"The project balances respect for the residential nature of the streetscape with the current needs of the university," said Stephen Brockman, a firm partner.

The team preserved the front portion of the historic buildings. Updates included repointed brick, a new roof, re-glazed windows and the repair of decorative elements.

In the rear, the architects added a multi-level extension wrapped in terracotta.

The building's entrance was moved to the south elevation and faces Locust Walk, a central artery on campus. The entry is fully accessible and sits just off a motor court.

The project also entailed the conversion of a former parking lot into a terrace with bluestone paving, where outdoor events can be held.

"The bold addition is accessible, welcoming and contextual, and it reorients the building toward a new, richly planted terrace," said Brockman. 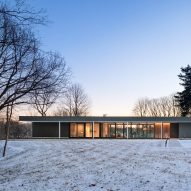 Within the building, a new lobby features a glass wall that looks upon the terrace. A staircase and elevator bring visitors to a half level, where one finds a conference room and an event space.

Upper floors contain offices, a board room, a multipurpose space and four guest suites. Rooms feature neutral tones with pops of colour, and a blending of historic details with contemporary decor.

The project has a number of sustainable elements, including a high-performance building envelope and energy-efficient mechanical systems. The building has earned LEED Gold certification from the US Green Building Council.

Architect Deborah Berke, who serves as dean at the Yale School of Architecture, founded her studio in 1982. Among the firm's projects are a student dormitory at a small Pennsylvania college that is clad in stone and zinc, and the conversion of a late 19th-century mental asylum in New York into a boutique hotel.

The photography is by Chris Cooper.